A Canadian judge ordered the protesters -- estimated to number a few hundred, along with several dozen trucks -- to leave the bridge by 7:00 pm. 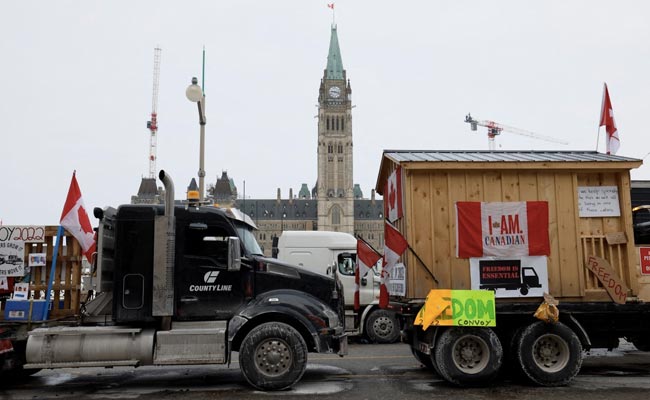 Authorities are under increasing pressure to crack down on the protests that have paralyzed Ottawa.

Truckers snarling a key bridge between Canada and the United States in protest at Covid rules were ordered by a judge to leave Friday night, setting up a potential showdown two weeks into the snowballing protest movement.

The days-long blockade of the Ambassador Bridge that connects Windsor, Ontario and the US city of Detroit, has paralyzed a key North American trade route, piling pressure on Canadian leader Justin Trudeau to resolve the crisis.

A Canadian judge granted an injunction ordering the protesters -- estimated to number a few hundred, along with several dozen trucks -- to leave the bridge by 7:00 pm (0000 GMT), according to Windsor mayor Drew Dilkens.

Authorities are under increasing pressure to crack down on the protests that have paralyzed Ottawa, triggering a state of emergency in Ontario province and copycat demonstrations as far away as France and New Zealand.

Upping the stakes, President Joe Biden Friday reiterated his "concern" to Trudeau, telling him the blockade of the Ambassador Bridge and two other border crossings was having serious effects on US firms.

The vital Windsor-Detroit bridge is used daily by more than 40,000 people, along with trucks carrying $323 million worth of goods on average -- about one-quarter of all Canada-US trade.

Addressing reporters in Ottawa, Trudeau said all options were "on the table" for ending the protests, though he stressed that calling in the military was a distant final resort, and "something to avoid having to do at all costs."

"This unlawful activity has to end and it will end," the prime minister said, adding that it was up to police to "enforce the law and protect public order."

The Canadian capital has been clogged with hundreds of big rigs for two weeks -- as the movement has morphed into a broader protest against pandemic health rules and Trudeau's government.

The days-long blockades have already had significant economic impact, with automakers forced to cut back production on both sides of the border, triggering fears it could undermine Canada's recovery from the pandemic.

In his call with Trudeau, Biden said the movement was impacting US companies and workers with "slowdowns in production, shortened work hours, and plant closures."

Canada's self-styled "Freedom Convoy" began last month in the country's west -- launched in anger at requirements that truckers either be vaccinated, or test and isolate, when crossing the US-Canada border.

The premier of Ontario province -- the epicenter of the protests -- announced a state of emergency on Friday, threatening steep fines of up to Can$100,000 ($80,000) and jail unless protesters end their "illegal occupation."

"To the people of Ottawa under siege, I say we will ensure you're able to resume life and business as soon as possible," said Ontario premier Doug Ford, who like Trudeau has been accused of inaction over the protests.

The Ontario emergency came as a coalition of protesters -- an estimated 1,800 vehicles according to a police source -- were closing in on Paris after setting off in convoy from across France.

Defying police warnings, the French protesters included opponents of Covid vaccination, but also people angry at fast-rising energy prices -- in an echo of the "yellow vest" grievances that sparked widespread protests in 2018 and 2019.

Protesters have likewise set up a makeshift camp outside New Zealand's parliament, scene of violent clashes earlier this week as police sought to clear anti-vaccine demonstrators.

The Ontario premier acknowledged the "right to peacefully protest" and said he understood "frustrations have reached a boiling point for many Canadians."

But he warned: "This is no longer a protest."

Ford accused the truckers of "targeting our lifeline for food, fuel and goods across our borders" while "trying to force a political agenda through disruption, intimidation, and chaos."

"We're in a critical situation worldwide economically... the last thing we need is an anchor around our neck," he said.

On Thursday evening, Ford's government separately obtained a court order barring anyone from tapping the millions of dollars raised by the convoy through the fundraising platform GiveSendGo.

The protesters had switched their fundraising efforts to the platform after GoFundMe terminated their original campaign, claiming it violated terms of service that "prohibit user content that reflects or promotes behavior in support of violence."