About 400 homes lost power and 50 fires were reported across Victoria on Saturday, although many were small and were extinguished. 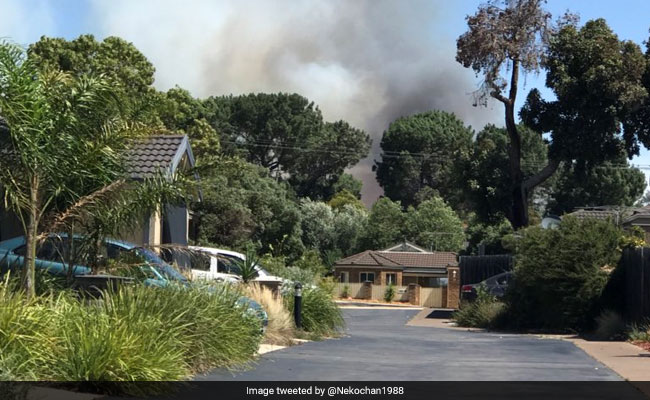 Smoke from bushfire near a residential area in Australia

Sydney: Bushfires in Australia destroyed buildings and threatened lives on Saturday as a heatwave in three states brought temperatures strong enough to melt the bitumen on a highway.

A fire raging out of control set several structures ablaze on the outskirts of Melbourne, the country's second largest city, and the capital of the southeastern state of Victoria.

"It's exactly what the forecast indicated and when we have fires running that's obviously a problem for us," he told a news conference.

About 400 homes lost power and 50 fires were reported across Victoria on Saturday, although many were small and were extinguished.

Emergency warnings were issued both in Victoria and in the nearby state of South Australia, where authorities advised residents of a rural area to seek shelter in buildings from an out-of-control fire.

Experts consider such a move to be safer than running the risk of getting trapped in the open if the fire suddenly changes direction.

The heat was strong enough to melt the bitumen on a 10-km (6-mile) stretch of freeway in Victoria, national broadcaster ABC News reported.

Australia is prone to deadly blazes, thanks to its combination of remote terrain, high summer temperatures and flammable eucalyptus bush.

In 2009, the worst bushfires on record destroyed thousands of homes in Victoria, killing 173 people and injuring 414 on a day the media dubbed "Black Saturday".

Promoted
Listen to the latest songs, only on JioSaavn.com
(Reporting by Alison Bevege; Editing by Clarence Fernandez)
© Thomson Reuters 2018