So far, no survivors from the tanker have been found and only one body has been recovered. All 21 crew members aboard the Chinese ship were rescued. 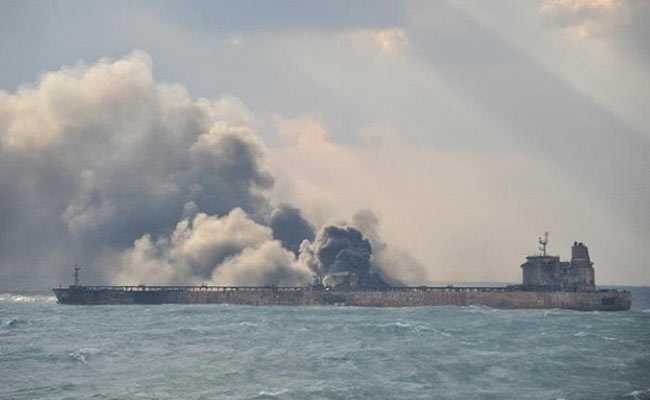 Beijing: The front section of an Iranian oil tanker that has been on fire for days off the east China coast has exploded, forcing rescue boats searching for 31 missing sailors to retreat and sparking environmental concerns.

Thirty-two crew members, including 30 Iranians and two Bangladeshis, went missing after the tanker carrying 136,000 tonnes of oil condensate from Iran to South Korea collided with a Hong Kong-registered bulk freighter and caught fire on Saturday in waters about 160 sea miles east of the Yangtze River's estuary.

Since then, the Panama-registered tanker Sanchi has been ablaze and drifting in the waters between Shanghai and southern Japan.

So far, no survivors from the tanker have been found and only one body has been recovered. All 21 crew members aboard the Chinese ship were rescued.

The front section of the tanker exploded yesterday. "Vessels at the scene have to stop putting out the fire and withdraw back to (a safe distance)," China's Ministry of Transport said. "The fire extinguishing operation did not achieve the desired effect," it said.

China's largest patrol ship Haixun 01 is fighting the fire after the explosion while organising other vessels to move away, the ministry said.

According to the ministry, Japanese sea police arrived at the scene an hour before the explosion and established contact with Haixun 01.

China's Ministry of Foreign affairs said yesterday that 12 vessels were searching for the missing sailors in the tanker's vicinity before the explosion, and efforts were continuing to clean up any spilled light crude.

Since the crash, the tanker has been billowing thick plumes of black smoke.

Officials worry that the explosion might sink the ship, releasing its 1 million barrels of oil into the water. The resulting spill would be about three times as big as the Exxon Valdez spill of 1989, one of the worst environmental disasters in history.

"For now, burning might be good for consuming the leaked oil, but there will be some remaining for which disposal will be difficult," Lin Boqiang, director of the China Centre for Energy Economics Research at Xiamen University, told the Global Times.

Sanchi was carrying 1.36 lakh tons of condensate oil when it collided with CF Crystal, a Hong Kong-registered bulk freighter in waters about 160 nautical miles east of the Yangtze River estuary.

Promoted
Listen to the latest songs, only on JioSaavn.com
Experts are especially worried because the ship is carrying condensate, an ultralight version of crude oil. Condensate is highly toxic and even more combustible than regular crude oil. It also is nearly colourless and odourless, which makes it difficult to detect. Oil is usually not degradable, meaning the damage to the ocean would be long-term.

Zhao Ruxiang, an expert with China's Yantai Oil Spill Response Technical Centre, was quoted by the ministry as saying that a simulation test showed condensate oil in the water can evaporate so quickly that it will leave little residue - less than 1 percent after five hours. "It is toxic and volatile when exposed to air," Zhao said.