The Royal Marines assisted Gibraltar authorities to board the ship in the early hours of Thursday and detained the vessel and its cargo, the statement said. 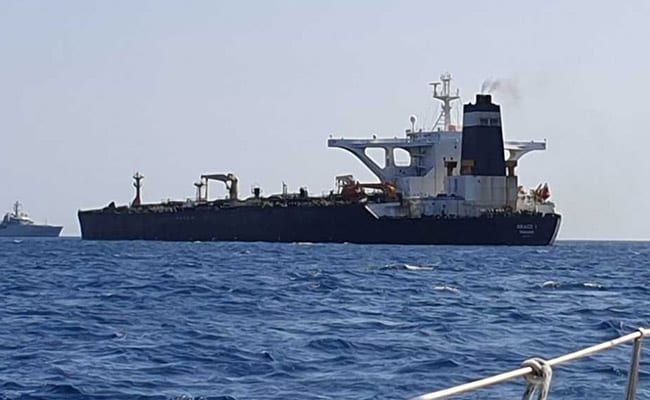 Gibraltar said the oil was destined for Syria's Baniyas refinery on the Mediterranean coast.

British Royal Marines in fast boats and helicopters on Thursday seized a supertanker suspected of carrying Iranian oil to Syria near the Mediterranean peninsula of Gibraltar, the first such detention of a ship under the terms of European sanctions targeting supplies to Syria.

The delivery appeared to violate both European Union and U.S. sanctions on oil deliveries to the Iran-allied Syrian government. But suspicions that the oil originated in Iran could also aggravate the tensions between Western countries and Tehran that erupted after recent attacks on shipping in the Persian Gulf.

The Grace 1 tanker was seized after Gibraltar received information that offered "reasonable grounds" to conclude that the vessel was likely to be delivering oil to Syria in breach of E.U. sanctions on that country, according to a statement from the government in Gibraltar, which is indirectly ruled by Britain.

The Royal Marines assisted Gibraltar authorities to board the ship in the early hours of Thursday and detained the vessel and its cargo, the statement said. A British Defense Ministry spokeswoman said 30 British marines boarded the ship from boats and a helicopter after a request by Gibraltar, which lies along the coast of Spain at the mouth of the Mediterranean.

Gibraltar did not disclose the provenance of the oil. The vessel is registered in Panama and owned by a Singapore-based company.

But Iran is the only nation known to be seeking to supply oil to Syria in defiance both of an E.U. embargo as well as strict new U.S. sanctions targeting oil deliveries to Syria that have contributed to severe fuel shortages in government-held areas of the country.

The Reuters news agency said it had reviewed shipping data that suggested the tanker had been loaded with Iranian oil off the coast of Iran. The ship's documents, however, say the oil is from neighboring Iraq, Reuters said.

This is the first time a European country has sought to impound deliveries of fuel to Syria, which has been subjected to E.U. sanctions since the ongoing war there erupted in 2011. Iran has regularly supplied fuel to President Bashar al-Assad's regime throughout the war, as part of Tehran's effort to sustain his hold on power.

Gibraltar said the oil was destined for Syria's Baniyas refinery on the Mediterranean coast. As a government-owned entity, it was added to the E.U. sanctions list in 2014. Some European diplomats questioned, however, whether the sanctions could be legally applied to third countries and not just E.U. member states.

The U.S. sanctions imposed in November went further than the E.U. measures, targeting shipping owners and insurers associated with oil deliveries to Syria as well as the suppliers. They prompted a dramatic curtailment of Iranian supplies earlier this year and acute shortages of fuel, which caused widespread grumbling among Syrians.

The supertanker had apparently made a circuitous journey from Iran around the Cape of Good Hope in Africa to the Mediterranean to avoid traversing the Suez Canal, the route previously taken by tankers sailing between Iran and Syria. Egyptian authorities detained a ship carrying Iranian oil to Syria at the canal earlier this year, and although Egypt has said the seizure was unrelated to the U.S. sanctions, Syria has said it suspects it was.

The Gibraltar incident could trigger new tensions between Britain and Spain over the peninsula's status. Speaking in Madrid on Thursday, Spain's caretaker foreign minister, Josep Borrell, said Spanish authorities were "looking into how this (operation) affects our sovereignty."

Britain has considered Gibraltar, located in southern Spain, to be part of its territory since the 1700s. Spain disputes those claims, which have become a major obstacle in negotiations over Britain's departure from the E.U. Both Spain and Britain are part of the E.U.

Gibraltar mostly governs its own affairs, but its foreign policy is run out of London and the British military operates a small air force base there.