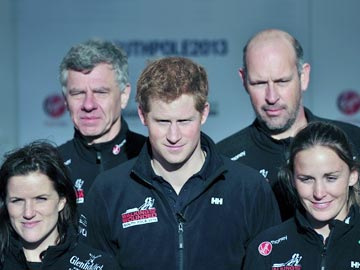 Prince Harry along with wounded servicemen and women in London, on November 14, 2013, as he prepares to join a team of four injured British soldiers for a trek to the South Pole.

London: Britain's Prince Harry was due to arrive in South Africa on Monday as he makes his way to Antarctica for a gruelling trek to the South Pole.

The royal is taking part in a 335-kilometre (210-mile) race between three teams of four wounded military personnel, representing Britain, the United States and the Commonwealth (drawn from Australia and Canada).

The 29-year-old army attack helicopter pilot will trek alongside the British team in the charity race to the planet's southernmost point, which is expected to take 16 days.

After arriving in Cape Town on a flight from London, the teams were to fly on Tuesday to the air base by Russia's Novolazarevskaya Station, at the edge of the Antarctic continent.

Once acclimatised to the altitude and freezing temperatures, the teams hope to begin the race on November 29. They aim to reach the South Pole around December 17.

Each team has a mentor and a polar guide.

Harry is patron of organisers Walking With The Wounded, which raises funds to retrain injured troops and help them find new careers outside the military.

"All the men and women behind me have achieved so much just to get here, let alone actually walk to the South Pole," he said, flanked by the competitors.

"It's just a wonderful display of courage from their part.

"These guys aim to achieve something quite remarkable, and in doing so will prove to everybody else that even though you've lost a leg or lost an arm, or whatever your illness may be, that you can achieve pretty much anything if you put your mind to it."

He added: "This trip is another way of reminding everybody that as Afghanistan draws down and these guys aren't in the news any more... the support must continue."

Trekking around 20 kilometres per day, the teams will be pulling 70-kilogramme (155-pound) sleds.

They will likely endure temperatures as low as minus 35 degrees Celsius (minus 31 degrees Fahrenheit) and wind speeds of around 50 miles (80 kilometres) per hour.

Speaking at London Heathrow Airport on Sunday before departing, British army veteran Ibrar Ali, whose right arm was amputated after a roadside bombing in Afghanistan in 2007, felt both nervous and excited about the challenge ahead.

Speaking of Harry's involvement, he added: "He's a great team member and just fits in really well so no different to anyone else."

Harry, who is fourth in line to the throne of his grandmother Queen Elizabeth II, joined the Walking With The Wounded trek to the North Pole in 2011.

However, he had to come home early to be best man at his brother Prince William's wedding.