Brexit: The battle over Brexit is heating up as the opposition engages in a desperate last-ditch effort to delay it once more. 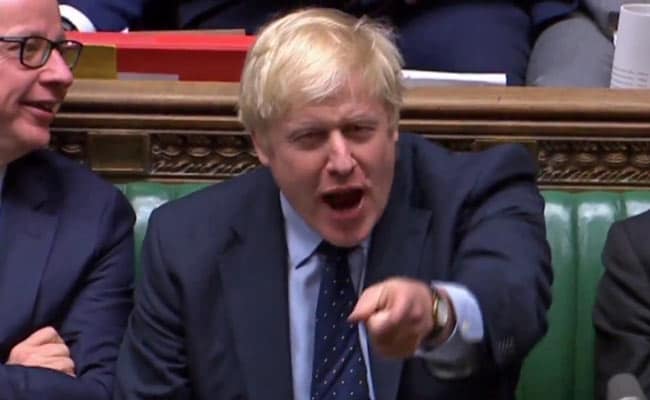 Brexit: 21 members of Boris Johnson's Conservative Party voted against him.

A rough day for Johnson, in which 21 members of his own Conservative Party voted against him to take control of the parliamentary agenda, concluded with the prime minister introducing a bill seeking a general election. He suggested he would seek action on that election bill Wednesday if he sees a second defeat and Parliament approves legislation to delay Brexit by another three months.

"Parliament is on the brink of wrecking any deal we might be able to strike in Brussels," Johnson said. "Because tomorrow's bill would hand control of the negotiations to the E.U. And that would mean more dither, more delay, more confusion."

While denying that he wanted an election, the prime minister added, "If the House votes for this bill tomorrow, the public will have to choose who goes to Brussels on October 17 to sort this out."

Johnson was selected as leader of Britain in July through a vote involving only dues-paying members of his party. A general election - putting all seats in the House of Commons up for a vote - could either sink his government or give him a popular mandate for his promise to leave the E.U. by Oct. 31, "do or die."

Johnson would need the support of two-thirds of Parliament to schedule an election, which could happen as soon as Oct. 14. It would be Britain's third general election in five years.

Opposition Labour Party leader Jeremy Corbyn said his party was prepared to fight an election, but he first wanted Parliament to pass the delay bill, and to ensure that Britain won't abruptly crash out of the E.U. in October without a deal to manage the withdrawal.

"Tonight we defeated Boris Johnson in his first Commons test and tomorrow we will legislate against his disastrous No Deal plans," Corbyn tweeted.

Johnson lost Tuesday's procedural vote by 328 to 301. That capped a humiliating day for the prime minister, who was appearing before Parliament for the second time since taking Britain's top job. He was jeered, heckled and laughed at mercilessly as he defended his hard-line Brexit stand.

As Johnson spoke, Conservative lawmaker Phillip Lee dramatically crossed the chamber to defect to the Liberal Democrats, explaining in a statement that Johnson's party had become "infected with the twin diseases of populism and English nationalism."

Lee's theatrical move stripped Johnson of his single-vote working majority in the House of Commons, making it all but impossible for him to enact legislation and increasing his incentive to ask the nation's voters for a mandate.

The British leader has stoked anger with particularly hard-nose tactics. He secured the queen's approval to suspend Parliament for five weeks as the Brexit clock ticks down and warned rebellious lawmakers from his party that he would kick them out and forbid them from running as Conservatives in the next election.

Soames told the BBC's "Newsnight" program that he was told he'd have the whip removed on Wednesday morning, after serving 37 years in Parliament. "That's fortunes of war," he said. "I knew what I was doing, but I just believe that they are not playing straight with us. To say you want a deal is quite different from saying you want a deal that is achievable."

Sitting next to him on the same program, Clarke, who became a Conservative member of Parliament in 1970, said that the Conservative Party under Johnson has become the "Brexit Party rebadged."

Johnson was catcalled from almost the moment he stood to speak in the House of Commons. He noted that Tuesday was the 80th anniversary of Britain's entrance into World War II and said, "This country still stands then as now for democracy for the rule of law." He was met with jeers.

He insisted that Britain was making progress in talks with European Union leaders about an orderly Brexit, which drew more mocking laughter.

Aided by repeated demands for "Order" by House Speaker John Bercow, Johnson said his opponents' proposal to delay Brexit by another three months after Oct. 31 would "force us to beg for yet another pointless delay."

"If that happens, all the progress we have been making will have been for nothing," Johnson said, calling the legislation "Jeremy Corbyn's surrender bill," referring to his chief opponent, the leader of the Labour Party.

In his response, Corbyn said, "This reckless government only has one plan, and that is to crash out of the European Union."

He said Johnson's government had "no mandate, no morals and, as of today, no majority."

In a sign of the economic uncertainty caused by the political turmoil, the British pound dropped to its lowest level against the dollar in 35 years, apart from a brief plunge in 2016 likely for technical reasons. It regained the lost value by the end of the day.

Catherine Barnard, a professor of European law at the University of Cambridge, said in a less-fractious era, Johnson might find other parties willing to cooperate with him. But, "at the moment, nothing is possible at all," she said.

Normally getting two-thirds support for a snap election would be easy, because the opposition would embrace an opportunity to unseat the prime minister.

But Labour hasn't been united in its enthusiasm. After holding cross-party talks, Corbyn told reporters Tuesday, "Let's see what happens after this legislation has gone through." He added that if an election were called, he would be "absolutely ready to fight it."

Emily Thornberry, Labour's point person on foreign affairs, said in a separate broadcast interview that Labour wasn't prioritizing a general election at the moment. "No, no, no there won't be a general election called tomorrow, because we're not going to vote for it," she said.

Mary Creagh, a Labour politician, told the BBC she worried Johnson could schedule the election date for after Oct. 31, which would mean that Britain would "crash out" of the E.U. on Oct. 31 by default.

"We will not be complicit in crashing our country out without a deal," Creagh vowed.

Johnson's opponents want to avert Britain from leaving the E.U. without an agreement in place to regulate trade, border security and other critical issues. Analysts say a no-deal Brexit could be economically damaging and lead to food and medicine shortages. Johnson has dismissed those predictions as fearmongering.

Johnson also said that any delay from the Oct. 31 deadline would disrupt progress on negotiations with the E.U. over an exit deal. And he said it would undercut the government's negotiating position.

Hammond said Johnson and his allies were being "disingenuous."

He said there is "no progress" going on in negotiations with the E.U. because the government has put forward "no proposals" and there wasn't even a negotiating team.

Guto Harris, Johnson's former communications director, told the BBC that Johnson risks "historical humiliation" in the Brexit maneuvering. "It looks as if he's prepared to bet on himself being the shortest-serving prime minister in history," Harris said.

Tuesday was another day of noisy protests outside Parliament, with demonstrators in E.U. blue chanting "Save our democracy! Stop the coup!"

Many wore yellow stickers that read "Bollocks to Brexit." There were also pro-Brexit signs that read, "Remain MPs are the only obstacle to a good deal" and "Traitor Parliament."

"Brexit is a bad idea," said Roger Horne, a retired accountant from London. Outside the bloc, "Britain would have to go on bended knee to either President Trump or the remaining E.U. I think we have greater power, greater influence in the E.U."

Referring to Johnson's threat to expel Tories who don't back him, he said, "Maybe Johnson is trying to turn it [the party] into some kind of religious sect."

Val Bateson, 77, a librarian, holding a large red "Vote Leave" placard, said, "Parliament has been fiddling about for three years and not implementing this even though they promised to do so."

When a group of pro-E.U. protesters marched by, chanting, "This is what democracy looks like!" Bateson said muttered under her breath, "You didn't get a majority, mate."

(The Washington Post's Laura Hughes in Los Angeles contributed to this report.)