Brett Kavanaugh called the charges against him "a circus," "a national disgrace" and a "high-tech lynching." 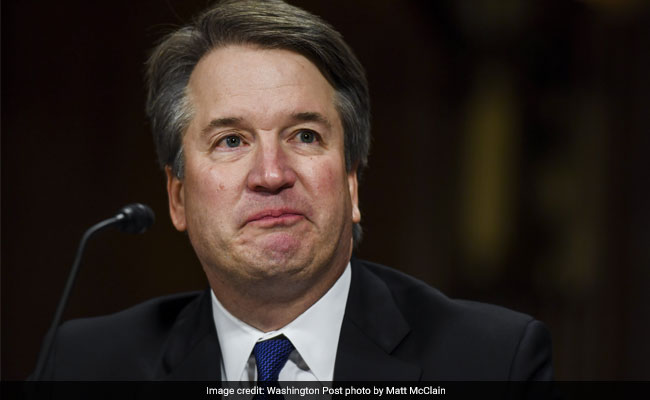 The most consequential Supreme Court opening in a generation gave rise to the most bitter Senate hearing in memory Thursday, as California professor Christine Blasey Ford accused Judge Brett Kavanaugh of sexually assaulting her when both were teenagers and Kavanaugh angrily assailed Democrats for pushing what he said were false charges to "blow me up and take me down."

The day began with an emotional punch as a self-described "terrified" Ford, her voice shaking at times, described in stark detail being pinned on a bed by a drunken Kavanaugh at a high school gathering.

Hours later, the drama escalated as a seething Kavanaugh faced the Senate Judiciary Committee from the same chair and adamantly denied her charges.

"You may defeat me in the final vote, but you'll never get me to quit. Never," the red-faced and defiant nominee told Democrats.

The 53-year-old federal judge was often tearful and paused for gulps of water as he spoke about the toll that the allegations by Ford and two other women have taken on his wife, his children, his parents and his friends.

"This has destroyed my family and my good name," he said, adding: "This whole two-week effort has been a calculated and orchestrated political hit, fueled with apparent pent-up anger about President Trump and the 2016 election."

Kavanaugh was openly contemptuous of Democratic senators, often demanding that they answer the questions they asked of him. And Republicans, who had silently listened to Ford's testimony, rose to his defense with angry charges against the other party. 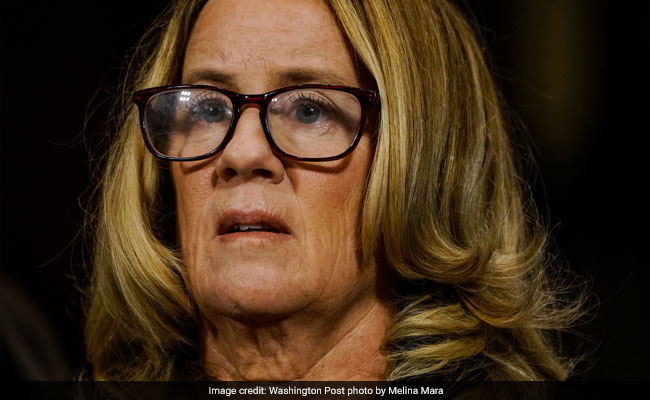 Sen. Lindsey Graham, R-S.C., called his Democratic colleagues power-hungry and warned fellow GOP senators: "If you vote no, you're legitimizing the most despicable thing I've seen in my time in politics."

The heated recriminations and countercharges that dominated Kavanaugh's appearance were a stark contrast to the morning, where committee members were rapt as Ford quietly unspooled her memories of being assaulted by Kavanaugh at a summer gathering in 1982.

Asked whether she was positive the person who assaulted her was Kavanaugh, she responded: "One hundred percent."

Later, Sen. John Neely Kennedy, R-La., asked Kavanaugh whether he had any doubts that the accusations were untrue.

The warring accounts from Kavanaugh and his accuser - the only witnesses permitted to testify before the committee - gripped the country and intensified what will be one of the most fraught confirmation votes in history.

Senate Majority Whip John Cornyn, R-Texas, said the Senate Judiciary Committee will vote on Kavanaugh's nomination as planned on Friday, with procedural votes on Saturday and Monday and a final confirmation vote on Tuesday.

As he left the Capitol on Thursday night, Senate Majority Leader Mitch McConnell, R-Ky., said, "The committee's going to vote in the morning, and we're going to move forward."

When asked by reporters after the hearing whether he believes Ford, Flake responded: "I'm not answering those kinds of questions." 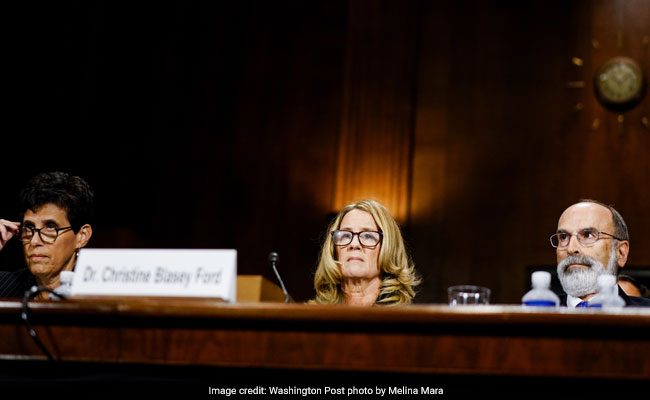 Murkowski said Thursday night that "I'm going to go home, have some dinner, and have a chance to think about all that's gone on today."

Trump, who was downcast after Ford's gripping testimony, was buoyed by Kavanaugh's combative response, aides said.

"Judge Kavanaugh showed America exactly why I nominated him," the president tweeted moments after the hearing concluded. "His testimony was powerful, honest, and riveting. Democrats' search and destroy strategy is disgraceful and this process has been a total sham and effort to delay, obstruct, and resist. The Senate must vote!"

The only comparison that came close to capturing the dynamic in the committee room was the 1991 confirmation hearings of Justice Clarence Thomas, whose nomination was almost derailed when Anita Hill accused him of sexual harassment.

Kavanaugh seemed to borrow heavily from Thomas' angry rebuke, in which he called the charges against him "a circus," "a national disgrace" and a "high-tech lynching."

Kavanaugh also called the proceedings a "circus" and added: "This confirmation process has become a national disgrace. The Constitution gives the Senate an important role in the confirmation process, but you have replaced advice and consent with search and destroy." 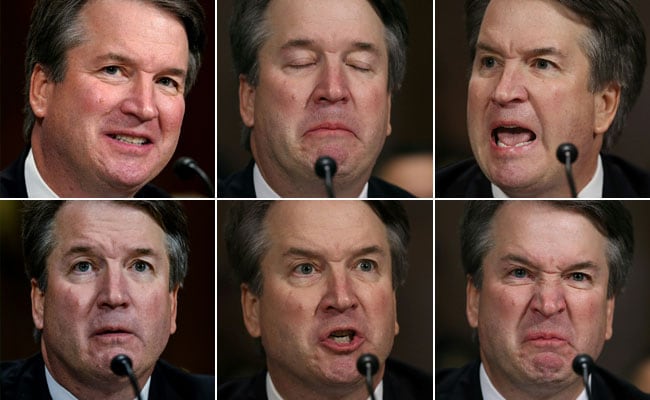 Kavanaugh would replace pivotal Justice Anthony Kennedy, often the key vote on abortion, affirmative action and the death penalty. Kavanaugh said the stakes of his nomination caused Democrats to try to stop him by any means.

Democrats rejected that, saying the GOP was trying to shift the focus from a woman with a credible allegation.

"What I find most inexcusable is this rush to judgment, the unwillingness to take these kinds of allegations at face value and look at them for what they are: a real question of character for someone who is asking for a lifetime appointment on the Supreme Court," said Sen. Dianne Feinstein, Calif., the ranking Democrat on the committee.

The details of Ford's account are by now familiar, but her nationally televised testimony - four hours that included a vehement denial that she could be confused about Kavanaugh's identity - rocked the hearing that will determine Kavanaugh's fate.

"I am here today not because I want to be," Ford, a psychology professor who grew up in the same Maryland suburbs as Kavanaugh, said at the beginning of her testimony. "I am terrified. I am here because I believe it is my civic duty to tell you what happened to me while Brett Kavanaugh and I were in high school."

Her voice shook at times as she spoke, and her face was drawn. Occasionally, she took deep breaths, swallowed and blinked back tears, but she remained composed throughout the morning.

She was accommodating of the committee's questioning - "Does that work for you?" she asked committee Chairman Charles Grassley, R-Iowa, at one point - but resolute in describing the events she said happened that summer in a house in the Bethesda area.

Ford said her "best estimate" was that before the gathering, she had been at Columbia Country Club in Chevy Chase, Md., where she frequently swam. She said she had not been drinking or taken medication.

Kavanaugh and his friend Mark Judge, she said, "were extremely inebriated. They had clearly been drinking prior [to the gathering], and the other people at the party had not." 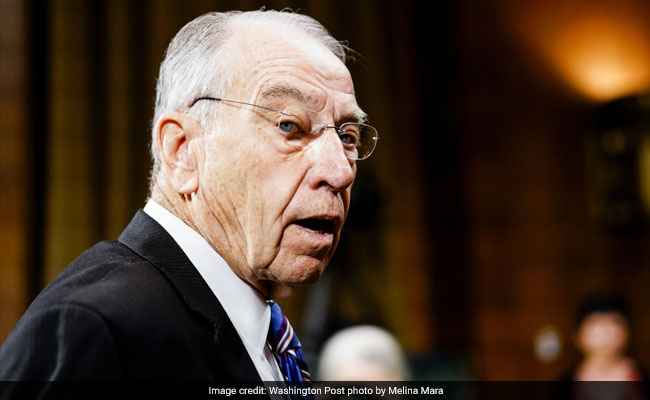 She described climbing a flight of stairs to use the bathroom when a drunken Kavanaugh and Judge pushed her into a bedroom and locked the door. She said Judge watched while Kavanaugh got on top of her and tried to remove her clothes.

"I believed he was going to rape me," she said. "I tried to yell for help. When I did, Brett put his hand over my mouth to stop me from yelling. This is what terrified me the most."

At that point, she said, she thought Kavanaugh was so out of control, "I thought that Brett was going to accidentally kill me."

Ford said she eventually escaped the bedroom and left the house.

Barbara Van Gelder, an attorney for Judge, said in a statement Thursday that he "does not recall the events described by Dr. Ford in her testimony."

Democrats have repeatedly pressed for Judge to be called to testify, but Republicans have declined to call him as a witness. On Thursday, Van Gelder said Judge does not want to comment publicly but is willing to answer written question and "participate in a confidential, fact-finding investigation."

In her testimony, Ford was calm and at times clinical in describing how memory works, drawing on her training as a psychologist. But her recollections were raw.

When asked what she remembered the most about her encounter with Kavanaugh, Ford replied: "Indelible in the hippocampus is the laughter, the uproarious laughter between the two. And they're having fun at my expense."

Ford said her initial motivation for telling her member of Congress about her encounter with Kavanaugh was to try to prevent him from getting the nomination. She knew there was a list of qualified candidates being considered, she said, and she hoped that if Trump and members of Congress knew her story, another candidate would be selected. She also called a tip line at The Washington Post.

She said she went public in an article in The Post only because word of her allegations had gotten out and other reporters had shown up at her home and in her classroom.

During her testimony, the 21 members of the Judiciary Committee appeared riveted.

Senators leaned forward in their seats, elbows on the table, intently focused. Flake looked especially gripped by her story, his hands folded in front of his face.

Senate Democrats argued that Ford's testimony was compelling and convincing, and pressed a hostile Kavanaugh for answers about his actions.

"This is a job interview for one of the most important positions of trust in this country," Sen. Mazie Hirono, D-Hawaii, adding: "There's certainly no entitlement for you to be confirmed to the Supreme Court."

In an unusual move, the Republican senators on the committee, all male, turned over their time for questions for Ford to Rachel Mitchell, a veteran sex-crimes prosecutor from Arizona.

The format - five minutes of questioning for the prosecutor, five minutes for a Democratic senator - often frustrated Mitchell's efforts to highlight Ford's inability to remember key details of the day, including where exactly the event took place and how she got home.

Later, when Kavanaugh testified, the GOP senators seized back the floor, using their time to accuse Democrats of leaking Ford's allegations late in the process to torpedo Kavanaugh, a charge they denied. 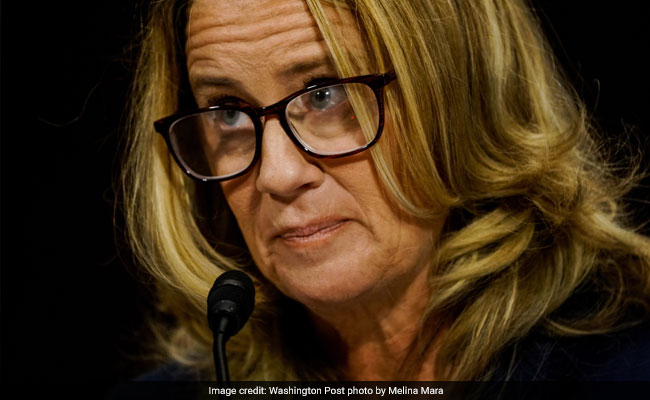 Kavanaugh, who did not watch Ford's testimony, said her assertion that he assaulted her was untrue.

"I'm not questioning that Dr. Ford may have been sexually assaulted by some person in some place at some time," Kavanaugh said. "But I have never done this. To her or to anyone. That's not who I am. It is not who I was. I am innocent."

Kavanaugh became emotional as he recalled his life in public service, including 12 years as a judge on the U.S. Court of Appeals for the District of Columbia Circuit.

"Throughout that entire time, throughout my 53 years and seven months on this Earth, until last week, no one ever accused me of any kind of sexual misconduct," he said. "No one, ever . . . A lifetime of high-profile public service at the highest levels of American government and never a hint of anything of this kind, and that's because nothing of this kind ever happened."

Three floors above the hearing, 130 members of the public watched Ford's testimony inside a packed overflow room. Outside, a line of people stretched down and around the hallway. Women, many of them high school and college students, bent over their cellphones to watch livestreams of the event. Some cried during Ford's opening remarks, saying her words resonated with their own experiences of sexual abuse.

Anita Abraham, 62, a mental-health advocate and Democratic activist from Milwaukee, said: "I'd give the world to thank her . . . She is so brave, so strong. I'm so proud of her."

She said Ford had inspired her to tell her husband about being molested as a 12-year-old.

"We cried together, and he told me how much he loved me. He told me he loved me even more," she said, crying. "I'd never told anyone before."