The clip was first posted on TikTok, where it was viewed more than 20 million times. 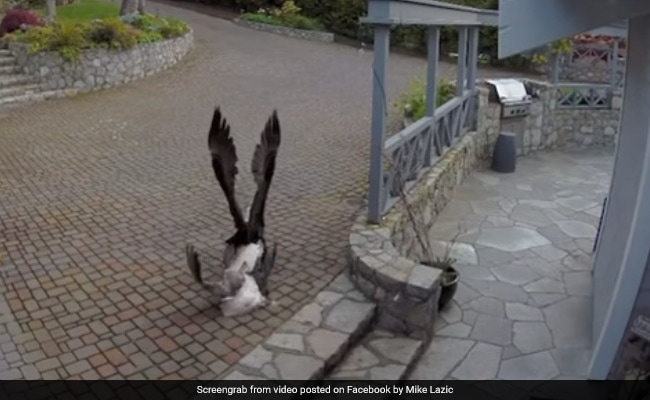 The eagle swooped down and grabbed the goose.

A woman is being hailed online for showing bravery in saving her pet goose while nursing her baby. Cait Oakley is seen rushing out with her baby in hand after hearing screams of the goose which was being dragged by an eagle. The incident took place in North Saanich, Canada's British Columbia, on May 16, according to People.

The video captured by a camera installed at her front door shows the goose, Frankie, patrolling the property outside. Suddenly an eagle swoops in and grabs Frankie by the neck.

That's when Ms Oakley, wearing just boxers and nursing her baby, charges the predator, scaring the eagle away. She waited for a few seconds to ensure the predator bird doesn't come back as Frankie rushes back inside the house.

“It was 6:30 pm, so I was inside getting changed and feeding Willow for bedtime,” Ms Oakley told Hawaii News.

She further said, "The only thing in my head was 'Drop it'!"

The goose escaped without a scratch.

"It's just that fight-or-flight response," Ms Oakley told CBC News and added, "This is mom life."

Speaking to CTV News, she said her husband Mike Lazic ran outside and pointed out that she was “topless”. “I'm like, 'I'm very aware of the situation'," she said.

The video has been posted by Mr Lazic on his Facebook page. “We have lost 3 chickens in the last week from what I was told was eagles which I thought hawks were preying on them but watch Frankie (our female goose) get taken. Mama bear mid breast feeding protecting her sweet Frankie. Officially living at a zoo,” he said in the post.

The clip was first posted on TikTok, where it was viewed more than 20 million times, People said in its report.