The robbery is yet another reminder of Brazil's deteriorating security. 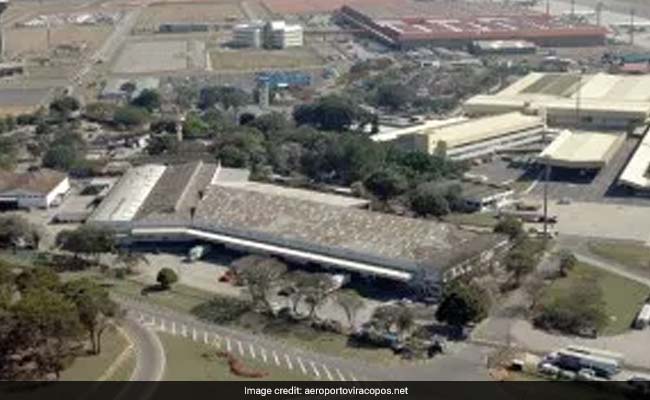 A group drove out of the Viracopos airport in Brazil with $5 million in cash before police arrived.

Five gang members wielding rifles infiltrated an international airport in Brazil on Sunday and carried out a carefully choreographed heist worthy of the big screen.

Police said the gang, using cars that were painted to resemble airport security vehicles, tore past two gates and drove into the cargo section of Viracopos Airport, 60 miles outside Sao Paulo. They attacked two security guards and stuffed them into a van, then invaded the tarmac and drove up to a parked Lufthansa plane just as employees were transferring bags of cash into an armored vehicle.

The group drove out of the airport with $5 million in cash before police arrived. Nobody was arrested.

"Everyone who passes through the Viracopos Airport is at the mercy of thugs," said Alberto Carvalho, a director at the National Union of Airport Workers, who has documented several instances of muggings, carjackings and kidnappings of employees in the vicinity of the airport. The highway that leads to the airport is notorious for crime, and several kidnapping attempts on the road made headlines here in recent years. "The airport is completely unprepared to deal with these risks," Carvalho said.

The heist is part of a crime wave that has made transporting goods in Brazil particularly dangerous. A record 10,500 cargo thefts were registered in 2017 in Sao Paulo, according to Sao Paulo state figures. In February, police busted a cargo-looting ring that was stashing stolen trucks and merchandise at a rest stop right outside Sao Paulo. In Rio de Janeiro, some areas are so dangerous for truckers that the post office has halted deliveries in nearly half the city.

Transporting merchandise on Brazilian roads became so treacherous that many companies opted to send shipments by plane. Located about an hour from Sao Paulo's city center, the Viracopos Airport has taken on more valuable shipments, and the volume of goods passing through the airport rose by 20 percent in 2017. It is now responsible for the most cargo traffic in Brazil.

While theft at the scale of Sunday's robbery is rare, it sounds another alarm about the country's deteriorating security situation.

Last month, President Michel Temer ordered the military to take over security in Rio de Janeiro after a spike in crime disrupted Carnival celebrations. Armed vehicles have rolled through the streets of Rio, fighting to regain control of some of the city's most dangerous slums.

To many observers, the complexity of the airport heist also illustrates the reach of organized crime.

Promoted
Listen to the latest songs, only on JioSaavn.com
"It shows that there is no place in Brazil that is immune to the problem of growing criminality," said Renato S&#233;rgio de Lima, president of the Brazilian Forum on Public Security. "The intervention in Rio is not enough. It is a national problem that we all need to work on."

(This story has not been edited by NDTV staff and is auto-generated from a syndicated feed.)
Comments
Viracopos AirportBrazil Airport HeistBrazilian Gang