Jair Bolsonaro announced the decree in May, enabling a wide range of professions, including truckers, politicians, hunters and even some journalists, to carry weapons 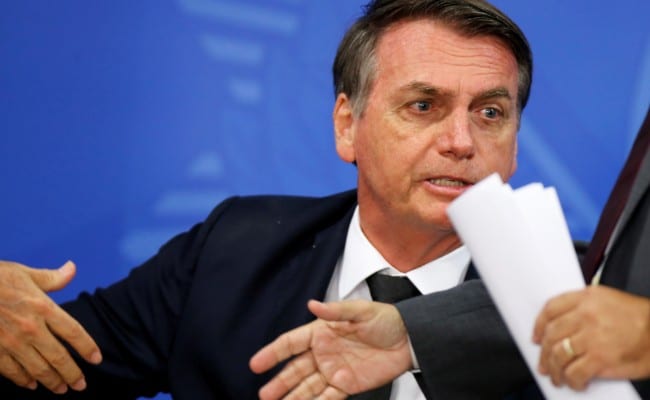 Brazilian President Jair Bolsonaro on Tuesday revoked an order that had loosened the country's gun controls, after it faced legal and political challenges.

The move came a day before the Supreme Court was due to debate the constitutionality of the decree that allowed millions of Brazilians to carry loaded weapons in public, which the Senate rejected last week.

Bolsonaro instead published three new decrees that appeared to exclude the most controversial points of the original order, but few details were available.

He also announced that proposed changes to legislation on the registration, possession and commercialization of weapons and ammunition had been sent to Congress.

Bolsonaro first announced the decree in May, enabling a wide range of professions, including truckers, politicians, hunters and even some journalists, to carry weapons without having to prove why they needed them.

Weeks later he revised the original order to restrict "common citizens" to carrying handguns but not rifles in public.

The original decree also allowed licensed gun owners to buy up to 5,000 rounds of ammunition a year, depending on the type of weapon, compared with the current limit of 50.

But it faced a strong opposition, even from governors in states with high rates of violence who argued the order failed to improve security.

Bolsonaro, a former army captain, has defended the decree as honoring the result of a 2005 referendum in which nearly 64 percent of Brazilians rejected a law that included, among other things, a total ban on the sale of firearms.

Bolsonaro, whose tough-on-crime rhetoric helped get him elected last year, has long spoken in favor of allowing people to carry guns on the streets. But that requires the support of Congress to change the law.

Critics had argued his decree breached the constitution because it created a new law, rather than modified an existing one.

Experts have warned the loosening of restrictions would fuel gun violence in a country which already has one of the highest homicide rates in the world.

A staggering 65,602 homicides were recorded in 2017, according to the latest figures based on health ministry data -- the equivalent of more than seven murders every hour.

The overall figure was 36.1 percent higher than a decade earlier, said the government-backed Institute of Applied Economic Research and the non-profit Brazilian Forum for Public Security in a recent report titled Atlas of Violence.

Authors of the report had warned Bolsonaro's decree could worsen the violence.