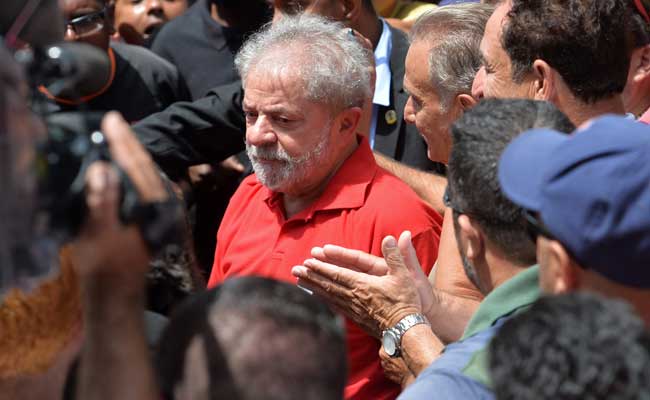 The latest delay leaves Lula, who was named chief of staff last month, in limbo while Rousseff's own job hangs by a thread, amid an impeachment fight that could force her to step aside within weeks.

After this new setback, the 68-year-old leftist president will travel to New York Thursday to sign a global climate pact at the United Nations, giving her an international stage to press her argument that she is the victim of a coup bid.

The lower house of Congress voted last Sunday to send impeachment proceedings to the Senate, which is expected to decide to put her on trial and suspend her by mid-May.

Rousseff had given Lula, her political mentor, the ministerial job on March 16, betting on his political prowess to save her job.

But a Supreme Court judge temporarily blocked the appointment, citing suspicions that it was a bid to shield Lula from prosecution in lower level courts, in connection with a massive corruption case at state oil giant Petrobras.

In Brazil, lawmakers and ministers can only be tried by the Supreme Court.

The full court, however, postponed its ruling after a justice requested the delay to add new files to the case and discuss all of them in a single hearing. No date was set for a new session.

Lula, a left-wing icon and founder of the ruling Workers' Party, is accused of accepting a seaside apartment and a country home as bribes from construction companies caught up in the multibillion-dollar graft scandal that has upended Brazilian politics.

Although Lula was blocked from taking the cabinet job, he led an intense lobbying campaign for votes in the lower house, which ultimately failed.

Supreme Court justice Celso de Mello rejected Rousseff's claims of a parliamentary coup, saying that it was "a constitutional procedure that took place until now in a climate of total legal normalcy."

Lula's potential return to the government could come too late, as local media surveys show that a majority of senators favor Rousseff's impeachment.

"I think that at this stage, whether or not Lula enters the government won't make a big difference," said political analyst Sergio Praca.

"A lot of things have happened these past few weeks and the fact that he was not authorized to take up his post caused a shock, a surprise, that had giant consequences" for Rousseff's government, he added.

Now for Lula, the bigger issue will be whether his political career can survive to elections in 2018, when he hopes to return to the presidency.

The former shoeshine boy and union leader took office in 2003, won a second term, and handed over to Rousseff, his handpicked successor, on January 1, 2011.

Lula's popularity and the success of the economy during a period of high commodity prices helped him ride out numerous corruption scandals plaguing the Workers' Party.

Now, even if the court does allow him to enter government, his stint may be over almost as soon as it starts.

If the Senate opens a trial, Rousseff would have to step aside for 180 days, replaced by her vice president Michel Temer.

After that, a two-thirds majority vote would be enough to oust her permanently.

Temer, who turned on Rousseff to support impeachment, is already assembling a future cabinet of his own -- and Lula would clearly not be welcome.

Temer will get a taste of the job this week as he will be in charge of the country while Rousseff is in New York until late Friday or early Saturday.

'The Snake Is Alive'

But Temer, of the centrist PMDB party, is not popular either, with an April 10 survey by polling firm Datafolha giving him no more than two percent of votes in the 2018 election.

For his part, Lula remains a formidable political force.

"The snake is still alive," the former president said recently.

Despite his legal troubles, a survey by polling firm Datafolha on April 10 found that 21 percent of Brazilians would vote for him in the first round of the 2018 presidential election, making him the frontrunner.
Comments
Dilma RousseffLuiz Inacio Lula da SilvaBrazil CourtBrazil