The rules were changed after the last tie in 1992, and organisers told this year's judges that they were not allowed to pick two winners. 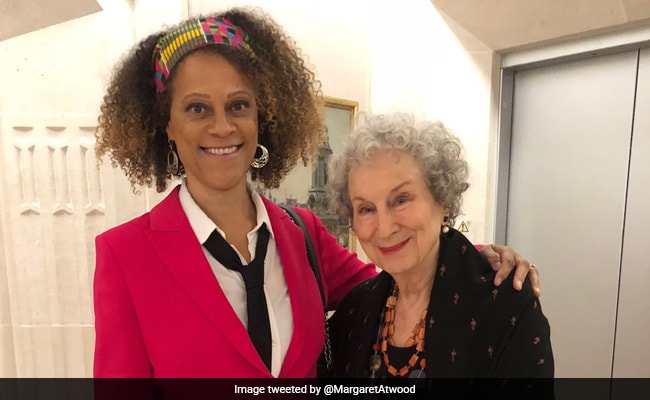 Margaret Atwood and Bernardine Evaristo jointly won the 2019 Booker Prize on Monday after judges "flout" the rules by declaring a tie.

British Indian novelist Salman Rushdie's tragicomic ''Quichotte'' was among the six books shortlisted for the prize.

The Booker rules say the prize must not be divided, but the judges insisted they "couldn't separate" Atwood's ''The Testament'' and ''Girl, Woman, Other'' by Evaristo, who is the first black woman to win the prestigious award since its creation in 1969.

The rules were changed after the last tie in 1992, and organisers told this year's judges that they were not allowed to pick two winners.

But after five hours of deliberations, Peter Florence, the chair of the five-member judging panel, said: "It was our decision to flout the rules."

The judges said they strongly wanted both the authors to split the GBP 50,000 award at a gala ceremony at Guildhall here. Seventy-nine-year-old Canadian author Atwood expressed her joy at sharing the award with a younger writer.

Atwood joked to her co-winner: "I would have thought I would have been too elderly, and I kind of don't need the attention, so I'm very glad that you're getting some."

"It would have been quite embarrassing for me... if I had been alone here, so I'm very pleased that you''re here too," she said.

Evaristo said, "We black British women know that if we don't write ourselves into literature no one else will."

"It''s so incredible to share this with Margaret Atwood, who's such a legend and so generous," the 60-year-old said, after the shock joint win was announced.

The others shortlisted included Lucy Ellmann for ''Ducks, Newburyport'', Chigozie Obioma for ''An Orchestra of Minorities'', and Elif Shafak for ''10 Minutes 38 Seconds in this Strange World''.

Atwood's ''The Testaments'' had been the bookmakers'' favourite to scoop the award. She had also made the shortlist with ''The Handmaid''s Tale'' in 1986, with her latest book set 15 years after the end of that novel.

The 2019 shortlist had been selected from 151 submitted books published in the UK or Ireland between October 2018 and September 2019.

On Rushdie's ''Quichotte'' the judging panel commented, "A picaresque tour-de-force of contemporary America, with all its alarms and craziness. Rushdie conjures a celebration of storytelling and language that will delight lovers of Cervantes, lovers of daytime television and lovers of life."

This was the fifth time that the Mumbai-born novelist was shortlisted, including the 1981 win where he bagged the award for "Midnight's Children".

The judging panel said this year's shortlist offered an insight into different worlds from the dystopian setting of Gilead, the monologue of an Ohio housewife and the tragicomic tale of a travelling salesman in America; to mostly female, mostly Black, British lives across generations, the trials of a young Nigerian man on a quest to improve his prospects and true allegiances within the brothels of Istanbul.

Florence, founder and director of the Hay Festival and Chair of the Booker Prize judging panel this year, said: "The common thread is our admiration for the extraordinary ambition of each of these books."

"There is an abundance of humour, of political and cultural engagement, of stylistic daring and astonishing beauty of language, " he said.

"Anyone who reads all six of these books would be enriched and delighted, would be awe-struck by the power of story, and encouraged by what literature can do to set our imaginations free."

Each of the shortlisted authors received GBP 2,500 and a specially-bound edition of their book.

Last year's winner was Northern Irish writer Anna Burns for 'Milkman'', which has sold around 546,500 copies in all formats since the award.

The Booker Prize for Fiction, first awarded in 1969, is open to writers of any nationality, writing in English and published in the UK or Ireland.

The prize is supported for the first time this year by venture capitalist Michael Moritz and novelist wife Harriet Heyman's charitable foundation Crankstart, rather than the Man Group.

(Except for the headline, this story has not been edited by NDTV staff and is published from a syndicated feed.)
Comments
Margaret AtwoodBooker Prize 2019Bernardine Evaristo