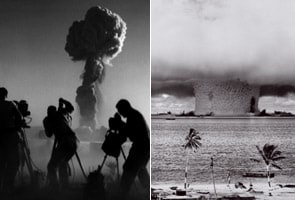 New York: They risked their lives to capture on film hundreds of blinding flashes, rising fireballs and mushroom clouds.

The blast from one detonation hurled a man and his camera into a ditch. When he got up, a second wave knocked him down again.

Then there was radiation.

While many of the scientists who made atom bombs during the cold war became famous, the men who filmed what happened when those bombs were detonated made up a secret corps.

Their existence and the nature of their work has emerged from the shadows only since the federal government began a concerted effort to declassify their films about a dozen years ago. In all, the atomic moviemakers fashioned 6,500 secret films, according to federal officials.

Today, the result is a surge in fiery images on television and movie screens, as well as growing public knowledge about the atomic filmmakers.

The images are getting "seared into people's imaginations," said Robert S Norris, author of "Racing for the Bomb" and an atomic historian. They bear witness, he added, "to extraordinary and terrifying power."

Two new atomic documentaries, "Countdown to Zero" and "Nuclear Tipping Point," feature archival images of the blasts. Both argue that the threat of atomic terrorism is on the rise and call for the strengthening of nuclear safeguards and, ultimately, the elimination of global arsenals.

As for the atomic cameramen, there aren't that many left. "Quite a few have died from cancer," George Yoshitake, 82, one of the survivors, said of his peers in an interview. "No doubt it was related to the testing."

The cinematographers focused on nuclear test explosions in the Pacific and Nevada.

Electrified wire ringed their headquarters in the Hollywood Hills. The inconspicuous building, on Wonderland Avenue in Laurel Canyon, had a sound stage, screening rooms, processing labs, animation gear, film vaults and a staff of more than 250 producers, directors and cameramen -- all with top-secret clearances.

When originally made, the films served as vital sources of information for scientists investigating the nature of nuclear arms and their destructiveness. Some movies also served as tutorials for federal and Congressional leaders.

"They have this very odd voice," said Mark Sugg, a film producer at the World Security Institute, a private group in Washington. "You and I would be appalled that some hydrogen bomb vaporized a corner of what used to be paradise. But they've got a guy bragging about it."

A 2006 book, "How to Photograph an Atomic Bomb," explores the nature of the cameramen's secretive enterprise, its pages full of declassified photographs and technical diagrams.

"They're kind of unrecognized patriots," said Peter Kuran, the book's author and a special-effects filmmaker in Hollywood. "The images that they captured will, for a long time, be a snapshot of what our last century was like."

After inaugurating the nuclear age and dropping two atomic bombs on Japan in World War II, the United States threw itself into expanding its nuclear arsenal. New designs required test detonations to make sure they worked properly. Between 1946 and 1962, the nation set off more than 200 atmospheric blasts.

The secret film unit, established in 1947 by the military, was known as the Lookout Mountain Laboratory. Surrounded by the lush greenery of Laurel Canyon, just minutes from the Sunset Strip, the lab drew on Hollywood talent and technology to pursue its clandestine ends.

"The neighbors were suspicious because the lights were on all night long," Mr Yoshitake recalled.

The cameramen fanned out from Wonderland Avenue to governmental test sites in the South Pacific and the Nevada desert, their job to chronicle the age's fury. It put them as close as two miles from the blasts.

The visual records helped scientists do everything from estimating the size of nuclear detonations to measuring their destructive power. Mock towns went up in flames.

Mr Yoshitake recalled documenting what a fiery explosion did to pigs -- whose skin resembles that of humans.

"Some were still squealing," he said. "You could smell the meat burning. It made you sick. I thought, 'Oh, how terrible. If they were humans they would have suffered terribly.' "

The cameramen were allowed to simply witness, not photograph, their first hydrogen bomb explosions, which were roughly one thousand times more powerful than atomic blasts. The goal was to get them accustomed to the level of violence.

"The purple glow in the sky -- that was so eerie," Mr Yoshitake recalled. "And we were not even close, about 20 miles way. It filled the whole sky."

Hollywood stars appeared in some of the films. Reed Hadley, star of the 1950s television show "Racket Squad," portrayed a pipe-smoking military observer who, in 1952, witnessed the world's first hydrogen blast.

"As you can imagine, feeling is running pretty high," he said, standing aboard a warship in the Pacific. "And there's reason for it. If everything goes according to plan, we'll soon see the largest explosion ever set off on the face of the earth."

Official Washington saw many of the films. Members of Congress, who controlled the appropriation of atomic funds, got special viewings.

Atomic leaders "put on their best shows" for Congress, Charles P Demos, a former classification official with the Department of Energy, which runs the nation's nuclear weapons program, recalled in an interview. "They probably affected a lot of the decisions."

The guarded enterprise lost its subject matter in 1963 when the superpowers agreed to move all testing of nuclear weapons underground, ending the spectacle of atmospheric blasts and what governments had come to regard as serious risks to human health from radioactive fallout.

In 1997, Hazel R O'Leary, the secretary of energy under President Bill Clinton, sought to declassify the old movies.

At a news conference, Ms O'Leary called the archive "a treasure trove" and promised to release the films after they had undergone any needed redactions for purposes of national security. Nuclear specialists say the shape and size of a weapon -- especially a hydrogen bomb -- can reveal design secrets.

The department's goal was to make public up to 20 films a month and complete the declassification project in five to seven years.

Late in 1997, an event in Hollywood at the American Film Institute honored the atomic filmmakers. Present were some two dozen of the survivors.

"You had to have the cameras running before the detonation," Douglas Wood, 75, a cinematographer, told a reporter at the gathering. If not, he said, the blinding flash "would burn the film and jam the film gate."

Mr. Kuran, the filmmaker, organized and filmed the Hollywood event. Impressed with the skill and courage of the cinematographers, he mixed the event footage with declassified bomb imagery to produce "Atomic Filmmakers," a video he sells on his Web site, www.atomcentral.com.

The declassifications stopped in 2001. The arrival of the Bush administration, and an outbreak of atomic jitters after the terrorist attacks on New York City and the Pentagon, combined to bring about the program's demise.

Today, the Energy Department says it has released publicly some 100 movies from the vast stockpile, which the military controls. "What you see is what we have," said Darwin Morgan, a department spokesman in Las Vegas.

A page on the department's Web site features links to clips from the atomic films that visitors can view free of charge and sells full versions as videodiscs for $10, plus shipping. It calls them "an enduring, awesome visual documentation of the power and destruction of nuclear weapons." Many are available free on YouTube under the search heading "declassified US nuclear test film."

Mr Kuran continues to work on the old movies, using high-tech methodologies to improve their clarity and restore faded images to their original glory.

"My passion is to find ways of fixing them up," Mr Kuran said in an interview. "The whole point is not to lose something that needs to be preserved. I doubt very much that they're going to be shooting off these bombs again in the atmosphere."

In April, he hosted a White House screening of "Nuclear Tipping Point." The documentary profiles a bipartisan group of former atomic officials who are promoting a vision of the world free of nuclear arms -- an objective in line with Mr. Obama's own policies.

Mr Yoshitake, the atomic cameraman, said the release and restoration of the images were healthy developments because their disclosure improved public understanding of the nuclear threat.

"It's a good thing to show the horror," he said.

And he wondered -- now that the cold war is over -- why advanced nations still retain more than 20,000 of the deadliest of all weapons.

Promoted
Listen to the latest songs, only on JioSaavn.com
"Do we need all these bombs?" Mr Yoshitake asked. "It's scary."