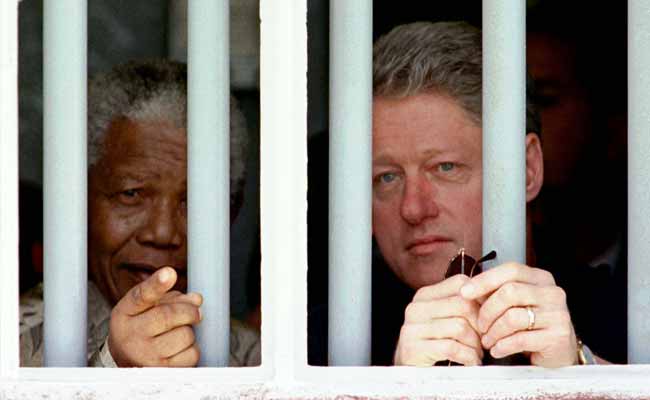 In this file photo, Nelson Mandela, and former US President Bill Clinton peer through the bars of prison cell No 5, where Mandela was jailed for 18 years in his struggle against apartheid, on Robben Island, South Africa. (AP)

As the boat pulled out from Nelson Mandela Gate and streamed over the Atlantic Ocean, I tried to imagine what it might have been like for political prisoners who were sent to Robben Island years ago. For many of the detainees, it would have been their first glimpse of the ocean. As a tourist with wind in my hair, I felt none of that anxiety, uncertainty and fear that must have surely filled the boats that were taking them away.

Today Robben Island is a world heritage site, a place of safety for the highly endangered African black oyster catcher and a penguin colony. At one time before being taken over for human activity, it housed thousands of seals, hence the name Robben Island or seal island. All the seals however were shot for meat and pelts and soon nothing was left except a rocky outcrop that was converted into an isolation camp for people suffering from leprosy. Then it served as a lunatic asylum, a defence outpost during the World War and finally as one of the most famous prisons in the world because of its most famous prisoner - Nelson Mandela.

Mandela was sent to Robben Island in 1964 and he remained there until 1982. It was here perhaps that the man who was a founding member of the Umkhonto We Sizwe, the armed wing of the African National Congress, became the Madiba who is known and loved today as a symbol of peace and hope.

When he first started his struggle against the apartheid system, Mandela, influenced by (Mahatma) Gandhi and a lawyer himself by profession, advocated for a peaceful resistance. In 1961, a large group of people marching peacefully in protest against a new law that would require black women to carry passes in order for them to be with their husbands outside of designated areas where their husbands worked were shot at. 69 people died, most of them women. It was after this incident - known as the Sharpville massacre - that Mandela lost hope that there could be a peaceful resolution to apartheid and created the MK (Umkhonto we Sizwe). They blew up many government installations and sabotaged government property. The famous Rivonia trial found Mandela guilty of treason and he was shipped off to Robben Island.

Standing outside the cell that used to house him and seeing its pitiful 8X7 feet dimensions, the iron bucket that served as a toilet and the thin blankets that served as bed, it struck me as extraordinary that he spent 18 years here without succumbing to despair and hatred.

Classified as a 'D-class' prisoner, he was treated as the lowest of the low, was prevented from wearing anything but a  pair of shorts for the first few years and only allowed one visitor a year. This perhaps was one of the hardest things for a man who loved family and community. He was not even allowed to attend the funerals of his mother and his son.

The black prisoners were also treated worse than their coloured and Asian counterparts. They were given less food to eat and never given bread which was distributed to the other prisoners. This was done in order to create dissent amongst prisoners and keep them divided.

Every day, the prisoners had to work in the lime quarry, breaking stones from dawn to dusk. Guards armed with guns and dogs would keep a watch on them. A small cave cut into the lime stone walls served as their toilet. Again, instead of letting this break them, Mandela organised this time into an informal university and ensured that prisoners talked and learnt from each other. Many smuggled books and newspaper articles were hidden in the soft sand of their makeshift loo where they knew the guards would never look. Mandela said he would never allow Robben Island to be seen as a place of despair. Rather, he wanted it to be seen as the place of the triumph of the human spirit.

He learnt to speak Afrikaans here so he could understand and communicate with his oppressors better. "When you speak to a man and he understands, he does so with his mind, but if you speak to him in his language he understands with his heart," he said. By the time Mandela left Robben Island to be transferred to Palsmoor prison in Cape Town, he had become friends with many guards and prison wardens and "Free Mandela" had become an international cry.

Madiba's greatest quality perhaps stemmed from the fact that he genuinely believed that "nobody is born hating others because of their colour religion or background. People must be taught to hate and if they can be taught to hate then they can learn to love because love comes more naturally to the human heart than it's opposite."

As I left Robben Island, I thought of a man who with a singular strength of character allowed his soul to just follow the truth, the truth of the fact that love, forgiveness and acceptance of the differences between people will always be a stronger force than hate and divisions. A truth that allowed him to shape a nation and pull it out of an abyss of hate and segregation shaping it into a free democracy with equality for all. He once said, "It's impossible only till it's done". Watching gulls wheel over blue waters that broke against the shore with the rising leviathan of Table Mountain in the background, I fervently hope that Mandela's words - "never, never, never again shall this beautiful country suffer the oppression of one by another" - always ring true.