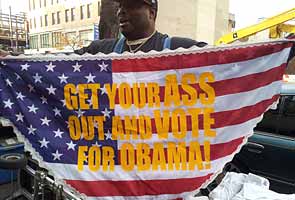 New York: It's the weekend before the big day, when America votes for its 57th president and the 'Obama one more time' chorus can be seen everywhere on the streets of Harlem, housing the largest African-American community in New York City. On a Sunday afternoon, it's jam-packed.

A fully functional subway has driven everyone outdoors, after it was closed on Monday due to super storm Sandy.

Street vendors had it all - badges, shoes, caps, t-shirts, mugs, CDs of the presidential speech in 2008. Also, a Democrat supporter holding up a huge banner in the shape of underwear with an American flag printed on it. 'Get your ass out and vote for Obama' was the message, in bold.

Not far away from him a woman and her son bought a poster, reading "Obama, President 2012."

It's not hard to judge, which way the vote will go in this part of town.

'Will you vote?" "Are you kidding me?' was the answer to my question when I asked Anna Lopez, if she would vote on Tuesday. "It's Obama all the way. He has done well," said the employee of Ezee Pass.

But what about the employment figures, since Obama took office and now? "He was put in a bad situation so how can he be blamed? Obama doesn't make rules; he single-handedly can't change things. Out Mayor is a billionaire, how much does he dispense? Obama comes from a humble background. My gut feeling is that he is an honest man." The sense of racial pride can't be missed.

From an upper middle class businessman like Kamal, who owns a chain of salons in the area, to a young street vendor like Hazim, November 6 is reserved for one chore. Hazim sells posters of icons like Martin Luther King Junior, Nelson Mandela, Mohammed Ali and the like. According to him, "Obama is the result of what all these leaders have done. Obama is a process. I am going to vote, partly because it's Obama." Overhearing our conversation another vendor, Newton, tells me "A poor man like me can survive only because of Obama. If not most of us would perish."
Comments
US Presidential election