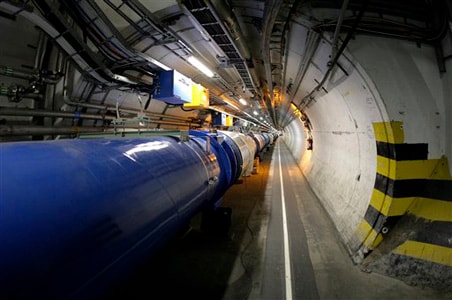 Geneva: It's being called a new beginning for our understanding of the universe and particle physics. After lengthy delays the multi-billion dollar scientific experiment to smash protons moving at near light-speed has been successful. (Read: What the Big Bang experiment part 2 is)

The experiment has taken place inside the world's largest and most powerful particle accelerator near Geneva belonging to the European Organisation for Nuclear Research (CERN). Inside the accelerator, two beams of particles travel at close to the speed of light with very high energies before colliding with one another.

Big Bang Experiment: Possible Outcomes:
Hunt For 'God Particle':
Goal:
How:
Large Hadron Collider:
The experiment was delayed because of a problem detected in the huge underground particle accelerator.

The $10 billion Large Hadron Collider directed the beams into each other Tuesday as part of its ambitious bid to reveal details about theoretical particles and microforces.

The collisions herald a new era for researchers working on the machine in a 17-mile (27-kilometer) tunnel below the Swiss-French border at Geneva.

"That's it! They've had a collision," said Oliver Buchmueller from Imperial College in London as people closely watched monitors.

In a control room, scientists erupted with applause when the first successful collisions were confirmed. Their colleagues from around the world were tuning in by remote links to witness the new record, which surpasses the 2.36 TeV CERN recorded last year.

Dubbed the world's largest scientific experiment, scientists hope the machine can approach on a tiny scale what happened in the first split seconds after the Big Bang, which they theorize was the creation of the universe some 14 billion years ago.

The extra energy in Geneva is expected to reveal even more about the unanswered questions of particle physics, such as the existence of antimatter and the search for the Higgs boson, a hypothetical particle that scientists theorize gives mass to other particles and thus to other objects and creatures in the universe.

Tuesday's initial attempts at collisions were unsuccessful because problems developed with the beams, said scientists working on the massive machine. That meant that the protons had to be "dumped" from the collider and new beams had to be injected.

The atmosphere at CERN was tense considering the collider's launch with great fanfare on September 10, 2008. Nine days later, the project was sidetracked when a badly soldered electrical splice overheated, causing extensive damage to the massive magnets and other parts of the collider some 300 feet (100 meters) below the ground.

It cost $40 million to repair and improve the machine. Since its restart in November 2009, the collider has performed almost flawlessly and given scientists valuable data. It quickly eclipsed the next largest accelerator -- the Tevatron at Fermilab near Chicago.

Two beams of protons began 10 days ago to speed at high energy in opposite directions around the tunnel, the coldest place in the universe, at a couple of degrees above absolute zero. CERN used powerful superconducting magnets to force the two beams to cross, creating collisions and showers of particles.

"Nature does it all the time with cosmic rays (and with higher energy) but this is the first time this is done in Laboratory!" said another tweet.

When collisions become routine, the beams will be packed with hundreds of billions of protons, but the particles are so tiny that few will collide at each crossing.

The experiments will come over the objections of some people who fear they could eventually imperil Earth by creating micro black holes -- subatomic versions of collapsed stars whose gravity is so strong they can suck in planets and other stars.

CERN and many scientists dismiss any threat to Earth or people on it, saying that any such holes would be so weak that they would vanish almost instantly without causing any damage.

Promoted
Listen to the latest songs, only on JioSaavn.com
Bivek Sharma, a professor at the University of California at San Diego, said the images of the first crashed proton beams were beautiful.