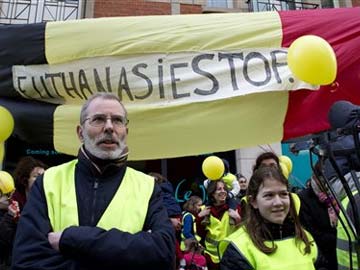 In this file photo of Sunday, Feb. 2, 2014, protestors stand in front of a banner which reads 'Euthanasia Stop' during an anti-euthanasia demonstration in Brussels

Brussels: Belgian lawmakers voted overwhelmingly on Thursday to extend the country's euthanasia law to children under 18.

The law empowers children with terminal ailments who are in great pain to ask to be put to death by their doctor if their parents agree and a psychiatrist or psychologist certifies they are conscious of what their choice signifies.

It has wide public support, but was opposed by some pediatricians and the country's Roman Catholic clergy. As House of Representative members cast their ballots and an electronic tally board lit up with enough green lights to indicate the measure would carry, a lone protester in the chamber shouted "assassins!"

Hans Bonte, a Socialist, said no member of the House hopes the law will ever be made use of. But he said all Belgians, including minors, deserved the right to "bid farewell to life in humane circumstances" without having to fear they were breaking the law.

The 86-44 vote in the House, with 12 abstentions, followed approval by the Senate in December.

Laurent Louis, an independent House member who opposed the legislation, said the majority of his colleagues were violating the natural order.

"A child is to be nutured and protected, all the way to the end, whatever happens," Louis said. "You don't kill it."

Another House member, Catherine Fonck, said the legislation was riddled with flaws and didn't address the possibility that one parent may favor euthanasia while the other is opposed.

All 13 proposed amendments seeking changes in the bill were defeated.

Daniel Bacquelaine, a physician and leader of the centrist Reform Movement, said it is wrong to think life and death questions should be reserved for adults. He stressed that the law imposed no obligations, and that no child, family or doctor would be forced to apply it.

Promoted
Listen to the latest songs, only on JioSaavn.com
The law will go into effect when signed by King Philippe. The Belgian monarch is not expected to oppose the measure, said Jean-Jacques De Gucht, a co-sponsor.

Belgium's euthanasia law, passed in 2002, previously applied only to legal adults. The neighboring Netherlands allows euthanasia for children as young as 12, providing their families agree.