The 24-year-old sprinter had been expected to take a direct flight to Warsaw but switched at the last minute, an airport official told reporters. 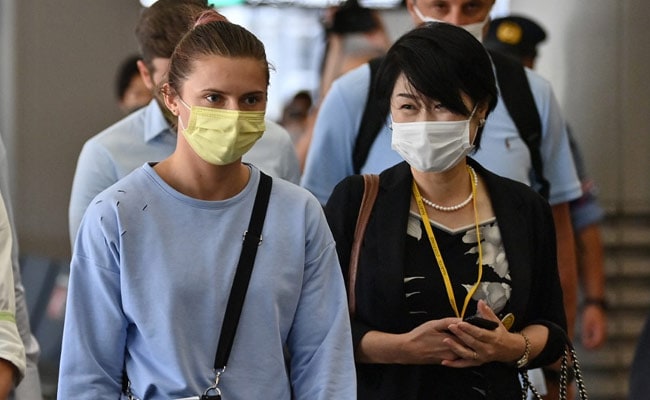 Tsimanouskaya declined to speak to the media at the airport (File)

Belarusian Olympic athlete Krystsina Tsimanouskaya left Japan on a Vienna-bound flight Wednesday and was expected to head for Poland, where she has been offered a humanitarian visa.

The 24-year-old sprinter had been expected to take a direct flight to Warsaw but switched at the last minute, an airport official told reporters.

She boarded the flight at Narita airport outside Tokyo after travelling from the Polish embassy where she had spent the past two nights following claims her team tried to force her to return home after she criticised her coaches.

Tsimanouskaya declined to speak to the media at the airport, and her flight took off shortly after 11 am local time (0200 GMT).

The sprinter sought protection from Tokyo 2020 officials on Sunday, claiming she was being forced to return to Belarus, which has been wracked by political upheaval and a crackdown on dissent after disputed elections that returned strongman Alexander Lukashenko to power last year.

Her husband has now fled to Ukraine and the pair are expected to meet up in Poland, which is a staunch critic of Lukashenko's regime and has become home to a growing number of dissidents.

Tsimanouskaya arrived in Poland's embassy on Monday evening following a night spent in an airport hotel.

Polish Prime Minister Mateusz Morawiecki said Tuesday he had spoken to the "courageous" Tsimanouskaya, who is "currently well taken care of and safe".

"I assured her that she can count on the support and solidarity of Poland. In the coming days, she will fly to Warsaw, where she will be able to thrive without obstacles and, if she so chooses, will receive further assistance," he wrote on Facebook.

The International Olympic Committee has said it will investigate Belarus's Olympic team over the incident, but activists have called for the country's Olympic committee to be suspended and its athletes to compete as neutrals.

Spokesman Mark Adams said Wednesday that the IOC had received a report from Belarus's Olympic committee, which was "being evaluated."

And he said the IOC has opened a disciplinary commission "to establish facts in this case".

NGO Global Athlete said Tsimanouskaya's "alleged kidnapping... is yet another example of the alarming athlete abuse occurring in Belarus".

Lukashenko and his son Viktor have been banned from Olympic events over the targeting of athletes for their political views.

Shortly before the Tokyo Games, Lukashenko warned sports officials and athletes that he expected results in Japan.

"Think about it before going," he said. "If you come back with nothing, it's better for you not to come back at all."

The alleged attempt to return Tsimanouskaya to Belarus has prompted condemnation, with US Secretary of State Antony Blinken accusing Lukashenko's government of "another act of transnational repression".

Lukashenko, who has been in power since 1994, sparked international outrage in May by dispatching a fighter jet to intercept a Ryanair plane flying from Greece to Lithuania to arrest a dissident onboard.

Polish Deputy Foreign Minister Pawel Jablonski seemed to reference that incident when he declined to confirm whether Tsimanouskaya would fly out on Wednesday as had been rumoured, citing safety.

The Olympic saga came as police in Ukraine said a missing Belarusian activist, whose NGO helps his compatriots flee the country, had been found hanged in a park in Kiev.

Police said they had opened a murder probe and would pursue all leads including "murder disguised as suicide", while activists accused authorities of "an operation... to liquidate a Belarusian who presented a true danger to the regime".

The United Nations has called on Ukrainian authorities to conduct a "thorough, impartial and effective investigation" into the death.