30 Years Since The Deadly Tiananmen Crackdown, US Calls It "Heroic"

In China the Communist Party made sure the anniversary remained a distant memory, detaining several activists in the run-up to June 4 while popular live streaming sites conspicuously shut down for "technical" maintenance 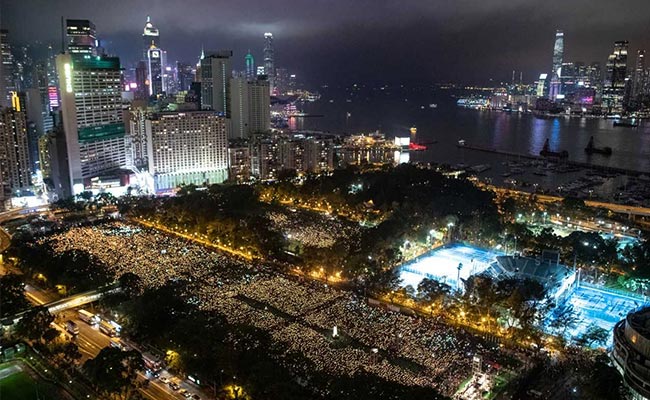 Beijing marked 30 years since the deadly Tiananmen crackdown on Tuesday with a wall of silence and extra security, while trading barbs with the United States over China's human rights record.

Police checked the identification cards of every tourist and commuter leaving the subway near Tiananmen Square, the site of the pro-democracy protests that were brutally extinguished by tanks and soldiers on June 4, 1989.

Foreign journalists were not allowed onto the square at all or warned by police not to take pictures. Officials also told one reporter that "illegal media behaviour" could impact visa renewals.

The United States marked the occasion by hailing the "heroic" movement of 1989.

But in China the Communist Party made sure the anniversary remained a distant memory, detaining several activists in the run-up to June 4 while popular livestreaming sites conspicuously shut down for "technical" maintenance.

Searches by news agency AFP for the term "Tiananmen" on the Twitter-like Weibo platform on Tuesday displayed the official logo of the 70th anniversary of the founding of Communist China.

Over the years, the party has censored any discussion of the protests and crackdown, which left hundreds, possibly more than 1,000 people, dead - ensuring that people either never learn about what happened or fear detention if they dare discuss it openly.

The party and its high-tech police apparatus have tightened control over civil society since President Xi Jinping took office in 2012, rounding up activists, rights lawyers and even Marxist students who sympathised with labour movements.

Countless surveillance cameras are perched on lampposts in and around Tiananmen Square.

"It's not that we don't care. We know what happened," said a driver for the DiDi ride-hailing service who was born in 1989.

"But how can I tell you, the DiDi app is recording our conversation in the car," he said. "But today's China has changed. If you have money you have everything. Without money you dare not open your mouth."

It was largely business as usual at Tiananmen on Tuesday: Hundreds of people, including children waving small Chinese flags while sitting on their parents' shoulders, lined up before dawn to watch the daily flag-raising at the square.

But the line moved slowly due to extra security - with IDs matched on facial recognition screens -- and dozens were unable to watch the event.

When asked whether it crossed her mind that she was visiting the square on the 30th anniversary, a nursing school graduate in her 20s from eastern Shandong province said, "What do you mean? No, it didn't cross my mind."

Her mother chimed in: "We don't think of that past."

But there were rare public acknowledgements of June 4 this year.

China's defence minister, General Wei Fenghe, on Sunday defended the crackdown as the "correct" policy to end "political turbulence" at the time.

And the nationalistic state-run tabloid Global Times hailed the government's handling of Tiananmen as a "vaccination" for Chinese society "against any major political turmoil in the future".

US Secretary of State Mike Pompeo sharply disagreed on how China has evolved as he praised the "heroic protest movement" in a statement for the anniversary.

"Over the decades that followed, the United States hoped that China's integration into the international system would lead to a more open, tolerant society. Those hopes have been dashed," Pompeo said amid a tense US-China showdown on trade.

He also denounced the "new wave of abuses" by China, including the mass incarceration of Uighur Muslims in northwest Xinjiang region.

The European Union added its voice to criticism of the official amnesia over the bloody crackdown.

"Acknowledgement of these events, and of those killed, detained or missing in connection with the Tiananmen Square protests, is important for future generations and for the collective memory," said a statement from EU diplomatic chief Federica Mogherini.

Taiwan President Tsai Ing-wen said the anniversary was a reminder to the self-ruled island that freedom and democracy are "valuable".

In spring 1989, students and workers gathered at the symbolic heart of Chinese power to demand democratic change and an end to corruption, inspiring protests across the country.

After seven weeks of demonstrations, the government deployed tanks and soldiers who chased and killed demonstrators and onlookers in the streets leading to Tiananmen Square on June 4.

"To open fire on people, that was beyond our expectations," Wang Dan, who was a 20-year-old protest leader in 1989, told AFP in a recent interview.

And the quieting of dissident voices continues: Among the string of activists recently detained or "disappeared" are six artists who had put up an exhibition titled "A Conscience Movement" in the eastern city of Nanjing.

Separately, folk singer Li Zhi, who had performed songs about Tiananmen, was reportedly missing, with his music and accounts on Chinese social media no longer available.

"There is no reason to be optimistic for China now if you look at what's happening," another Tiananmen protest leader, Zhou Fengsuo, told AFP in New York.

(Except for the headline, this story has not been edited by NDTV staff and is published from a syndicated feed.)
Comments
Tiananmen anniversaryCommunist Party ChinaTiananmen protests