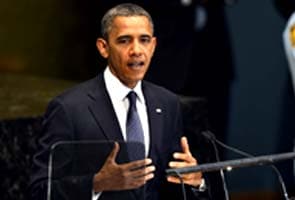 A file picture of Barack Obama

Washington: President Barack Obama warned Syria on Monday that the use of chemical weapons would be "totally unacceptable" and that the country's leaders would be held accountable.

Obama said that if Syrian President Bashar Assad made the "tragic mistake" of deploying chemical weapons, there would be consequences. Obama stopped short of detailing those consequences.

The White House said earlier on Monday that it was increasingly concerned that the beleaguered regime in Syria might be considering use of chemical weapons against its own people and warned that doing so would "cross a red line."

Obama spoke later on Monday at a gathering on securing nuclear weapons materials.