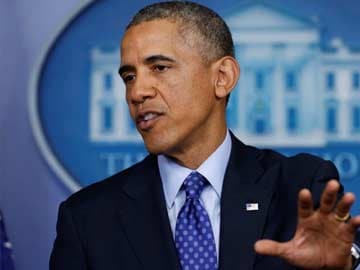 Washington: President Barack Obama said on Monday he had sent up to 200 US extra troops equipped for combat, with surveillance gear and helicopters, to protect the US Embassy in Baghdad.

Together with a 275-strong embassy protection force already sent and another 300 US special forces charged with advising the Iraqi army, the deployment will mean nearly 800 US soldiers will be in Iraq, following the sudden advance of Sunni Islamic State radicals.

"In light of the security situation in Baghdad, I have ordered up to approximately 200 additional US Armed Forces personnel to Iraq to reinforce security at the US Embassy, its support facilities, and the Baghdad International Airport," Obama said in a letter to Congress.

"This force is deploying for the purpose of protecting US citizens and property, if necessary, and is equipped for combat."

The Pentagon said in a statement that the new detachment had arrived in Iraq on Sunday and was also equipped with aerial drones to protect American personnel traveling away from the embassy - possibly in an evacuation.

There are now 475 US soldiers available to protect the US embassy and American citizens in Iraq.

Of the initial deployment to the embassy of 275 troops earlier this month, 100 had been on standby outside the country, but are now moving into positions in Baghdad, the Pentagon said.