"He Is Our Son": Obama Wins Hearts In Visit To Father's Native Kenya

In the village where Obama Sr. grew up, the former president's complicated roots with the country were on display. 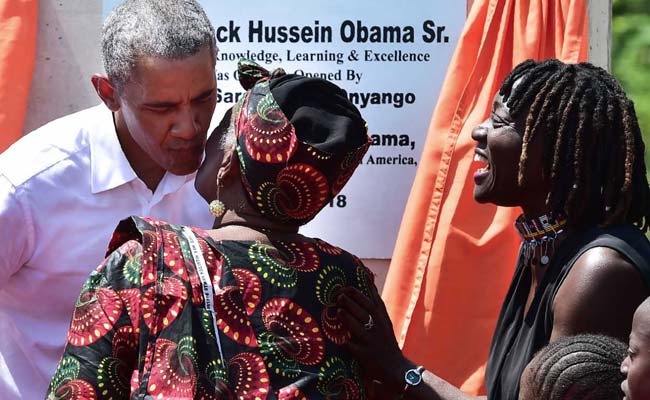 Barack Obama called himself a "citizen of the world" and decried Kenya's tribalism. (AFP)

Even for Barack Obama, who is often greeted by fervent throngs in his home country, the adulation the former president receives in his father's native Kenya is in a league of its own.

On Sunday and Monday, Obama was in Kenya for his first visit since leaving office. He began by meeting with Kenyan President Uhuru Kenyatta and opposition leader Raila Odinga, who have recently made peace with each other after a contentious election that led to violence earlier this year. But it was at his second stop, in Nyang'oma Kogelo, the small hilltop village - right on the equator - where his father grew up, that Obama's complicated relationship with his roots was on display.

"It's a joy to be here with family," he told an invitation-only crowd attending the launch of a vocational centre that will be run by his half sister Auma Obama's nonprofit. "And to be here with so many who claim to be my family." Despite not being born here, Barack Obama is as close as Kenya has to a favourite son. He is far more popular than the country's politicians. And as a global symbol, he is seen by many Kenyans as proof that greatness is attainable for them, too.

"He is our son," said Gilbert Ogutu, who is a professor and elder in the Luo ethnic group to which Obama's father belonged but is not related to Obama. "His blood is our blood."

The patrilineal Luos expect Obama to follow tradition and spend more time among his father's people - his people. The love expressed for him by many in Nyang'oma Kogelo is familial - unalloyed and full of expectation. But it also seems somewhat unrequited.

In a short speech full of platitudes, Obama called himself a "citizen of the world" and decried Kenya's tribalism. It echoed a speech he gave at a stadium in the capital, Nairobi, in 2015, which some Kenyans saw as patronizing.

On Monday, he also told the story of his first visit to Kenya, when he was 27, replete with punchlines about bucket showers and crowded buses. "I had to catch a chicken to eat," he recalled, although he added that the experience gave him "a sense of satisfaction that no five-star hotel could ever provide."

Nanjala Nyabola, a Kenyan author and political analyst, said Kenyans have "a grasping kind of love for Obama." "He doesn't seem to return it at all," she said. "What he's doing here is basking in it."

Through the event, Obama did many of the things he has come to be known for on past trips abroad. He briefly danced along to the music, jumbled two local languages together in a greeting and wrapped up his visit by shooting some hoops at the vocational center's new basketball court. 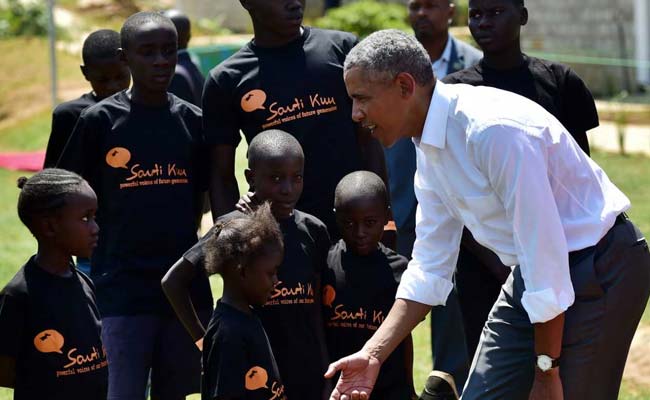 Barack Obama is in Kenya for the first time since he left the US presidency. (AFP)

In social media postings on the eve of his visit that have since earned hundreds of thousands of likes and shares, Obama described Africa as "a continent of wonderful diversity, thriving culture, and remarkable stories," before recommending summer reading by five African authors as well as his former speechwriter, Ben Rhodes.

He also wrote of being "profoundly influenced by my experiences" during his first visit to Kenya - a journey he wrote about in his first book, "Dreams From My Father."

"Obama has the equivalent of a semester abroad here," Nyabola said. "He comes from a long line of Western leaders who can't see Africa's complex realities. And more than anyone, Obama can get away with it."

Auma Obama learned that the hard way this weekend. She spoke out against what she perceives as a "gimme gimme" culture among Luos, denouncing demands for government handouts that she says are common. She was roundly criticized in the Kenyan media. 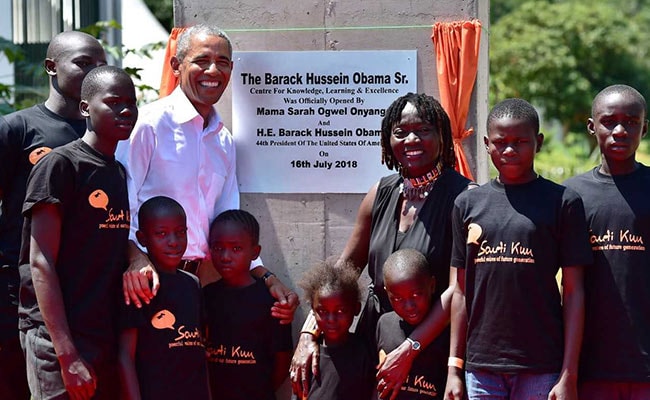 Barack Obama and his half-sister Auma Obama at the opening of the Sauti Kuu Resource Centre.

The next day, her half brother stood on stage and said, rather vaguely, that while Kenya was making strides, "we know that real progress depends on addressing the challenges that remain." He was addressing a similarly touchy issue - corruption - but Kenyan TV channels chose to go with other snippets of his speech.

Barack Obama's presidential legacy in Kenya is largely defined by his willingness to work with Kenyatta, despite the latter's indictment in the International Criminal Court for allegedly engineering post-election violence in 2007 and 2008. The U.S. government signed off on millions of dollars in security assistance to Kenya in the ensuing years.

The phrase being used in the Kenyan media to describe Monday's event was "low-key." When Obama visited as President, thousands lined the streets of Kenyan cities, shutting them down.

This time was much quieter. In Nyang'oma Kogelo, a caterer from Nairobi served craft beer dubbed "Obama Brew." Political and cultural celebrities milled about, some women walking across the vocational center's soccer field in pointy-toed, high-heeled shoes. Kenyan music gave way at times to Motown hits and Toto's ubiquitous and bewildering classic "Africa."

On Monday afternoon, after just over 24 hours in Kenya, Obama departed for Johannesburg, where he will give another lecture, this one marking the 100th anniversary of Nelson Mandela's birth. He will also meet with 200 young Africans who were selected to partake in a leadership program run by the Obama Foundation.

(Except for the headline, this story has not been edited by NDTV staff and is published from a syndicated feed.)
Comments
Barack ObamaKenya VisitObama Kenya Visit