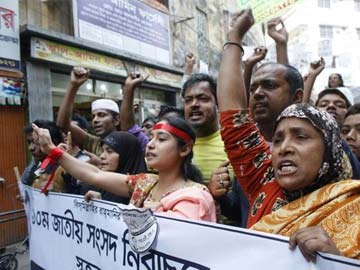 Supporters of independent candidate Hazi Mohammad Salim shout slogans as they take part in a campaign rally ahead of Bangladesh's parliamentary elections in Dhaka.

Dhaka: With a brass band, horse-drawn carriages and political posters flapping overhead, the rally in an old section of the Bangladesh capital had all the trappings of a spirited election.

But the two candidates vying to represent the Lalbagh constituency, among the minority of seats to be contested by more than one candidate in nationwide polls set for Sunday, are both in the ruling Awami League, which is poised to steamroll to victory as the main opposition party sits out the vote.

The Bangladesh National Party (BNP) is boycotting in protest at Prime Minister Sheikh Hasina's move to scrap the tradition of letting a caretaker government oversee elections. The impasse undermines the legitimacy of the poll and is fuelling worries of economic gridlock and further violence in the impoverised South Asian country of 160 million.

"The acrimony between two of our main leaders has brought this country to where it is now and not just crippled our economy and growth, but also our democratic system," said Badiul Alam Majumdar, secretary of Citizens for Good Governance, a non-governmental organisation.

Either Hasina or BNP chief Begum Khaleda Zia has been prime minister for all but two of the past 22 years and there is deep enmity between them.

While the outcome of Sunday's poll seems certain, what happens afterwards is not. That could imperil Bangladesh's $22 billion garment industry, which accounts for 80 percent of exports and has been hampered by a series of nationwide strikes, including an ongoing transportation blockade called by the BNP.

Pre-election violence that killed more than 100 people, mostly in rural areas, had eased in recent days, although two people were burnt to death early on Friday when opposition activists hurled petrol bombs at a truck in northern Dinajpur, according to police. Five polling centres were set on fire in southeastern Feni, Khaleda's hometown.

Meanwhile, verdicts in the International Crimes Tribunal investigating atrocities committed during the 1971 war of independence from Pakistan have elicited a violent reaction from activists affiliated with the Jamaat-e-Islami party, an Islamist ally of the BNP.

Last month, the first execution resulting from the tribunal was followed by deadly violence against Awami League members.

Hasina has spoken of holding talks following Sunday's polls with the opposition on the conduct of future elections.

If successful, these could eventually result in another election. The BNP demands that the current electoral process be halted.

Many opposition leaders are in jail or in hiding. Khaleda is under what appears to be house arrest.

"Even if the BNP wanted to sit down to a dialogue, the atmosphere does not exist," Shamsher Mobin Chowdhury, a BNP vice chairman who was detained for several hours following a recent visit to Khaleda's home, told Reuters on Friday.

The Awami League argues that the interim government system has failed in the past.

"The election will be held under a strong and independent Election Commission, not under any unelected people," Hasina said in a televised speech on Thursday night.

A poll published in Friday's Dhaka Tribune found support to be evenly split between the two parties, with the BNP backed by 37 percent of respondents and the Awami League 36 percent.

The European Union, a duty free market for nearly 60 percent of Bangladesh's garment exports, has refused to send election observers, as have the United States and the Commonwealth, a grouping of 53 mainly former British colonies.

"We're disappointed that the major political parties have not yet reached a consensus on a way to hold free, fair, and credible elections," Marie Harf, a U.S. State Department spokeswoman told a briefing on Thursday in Washington.

Promoted
Listen to the latest songs, only on JioSaavn.com
While the military could step in to take power in the event of a breakdown of law and order - which it did in 2007 - it is widely seen as reluctant to do so.

"Sheikh Hasina's main challenge is to convince the world these elections are credible and because that is not possible she will need a well-planned exit strategy to eventually conduct fair elections," said Iftekhar Zaman, executive director of global anti-corruption body Transparency International in Bangladesh.
© Thomson Reuters 2014
Comments
BangladeshBangladesh elections