The U.S. embassy in Bangladesh criticised the crack-down on protesters who it said had "united and captured the imagination of the whole country." 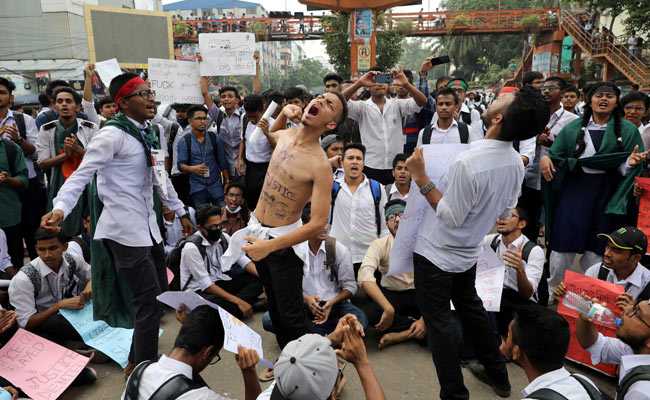 Bangladeshi police fired tear gas on Sunday to disperse tens of thousands of students protesting for the eighth day to demand safer roads after two teenagers were mown down by a bus.

The students blocked roads, only letting emergency vehicles through, and the government has threatened to get tougher if the protests become too disruptive.

The U.S. embassy criticised the crack-down on protesters who it said had "united and captured the imagination of the whole country."

The embassy tweeted that while it did not condone property damage by some of the protesters: "Nothing can justify the brutal attacks and violence over the weekend against the thousands of young people who have been peacefully exercising their democratic rights in supporting a safer Bangladesh."

Spontaneous student protests are rare in Bangladesh, and Prime Minister Sheikh Hasina suggested her political rivals were using the issue to stir up anti-government sentiment ahead of a general election this year. The opposition Bangladesh Nationalist Party has denied involvement in the protests.

In response to the unrest, the government launched a week-long drive to check vehicle certificates in a bid to improve traffic safety, but said it would not tolerate more disruption by the protesters.

"Everything has an optimum point, and if anyone crosses the limit, action will be taken ... so don't cross the limit," Home affairs minister Asaduzzaman Khan said while inaugurating "traffic week" in Dhaka.

More than 4,000 people die in road accidents in Bangladesh each year, one of the world's highest rates. Serajul Islam Chowdhury, a professor at Dhaka University, said it was common to cut corners on safety.

Separately, the car of outgoing U.S. ambassador, Marcia Bernicat was attacked by armed men, some on motorcycles, in Dhaka on Saturday, the embassy said in a statement.

"The ambassador and her security team departed the area unharmed ... however, two security vehicles sustained some damage," it said.

Police said they had not identified the attackers.