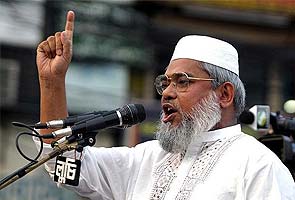 Dhaka: A Bangladesh war crimes tribunal sentenced a top Islamist politician to death on Wednesday for crimes during a 1971 war of independence, as his supporters clashed with security forces in different parts of the country.

Ali Ahsan Mohammad Mojaheed, 65, secretary general of the Jamaat-e-Islami party, was convicted on charges of genocide, conspiracy in killing intellectuals, torture and abduction during the war to break away from Pakistan, lawyers said.

Mojaheed looked defiant and shouted "wrong judgment" when the judge handed down the sentence.

Prime Minister Sheikh Hasina set up the tribunal in 2010 to investigate abuses during the conflict and it delivered its first verdict in January.

The prime minister's opponents say she is using the tribunal against the two biggest opposition parties, the Bangladesh Nationalist Party (BNP) and the Jamaat-e-Islami.

Former Prime Minister Begum Khaleda Zia, Hasina's arch rival and leader of the BNP, has called the tribunal a "farce". Rights groups have criticised it for failing to adhere to standards of international law.

The ruling party has rejected such criticism and denied accusations of bias.

More than 100 people have been killed in protests and counter-protests since the tribunal's first verdict in January.

Bangladesh became part of Pakistan at the end of British rule in 1947 but it broke away from Pakistan in 1971 after a war between Bangladeshi nationalists, who were backed by India, and Pakistani forces.

Some factions in Bangladesh, including the Jamaat, opposed the break with Pakistan but the party has denied charges that it collaborated with the Pakistani army.

About three million people were killed during the nine-month war, according to official figures, and thousands of women were raped.

Violence flared in several towns on Wednesday, the third day of a protest strike called by the Jamaat. There were no reports of deaths on Wednesday but nine people were killed on Monday and Tuesday, police and witnesses said.

Veterans of the war were among hundreds of people outside the court who cheered the verdict.

"Finally, he will go to the gallows," Nasiruddin Yusuf, a filmmaker and war veteran, told reporters, referring to Mojaheed.

Promoted
Listen to the latest songs, only on JioSaavn.com
The verdict came two days after Ghulam Azam, a former Jamaat head, was sentenced to 90 years in prison on similar charges.

Five more Jamaat leaders and two from the BNP are on trial. The tribunal is due to deliver verdicts in their cases soon, the government says.
© Thomson Reuters 2013
Comments
Bangladesh Islamist leader