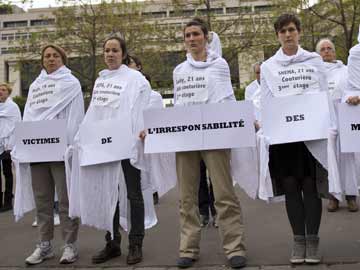 People wear funeral shrouds and hold placards reading "Victims of the foolishness of multinational companies" as they take part in a protest marking the first anniversary of the Rana Plaza building disaster in Dhaka on April 24, 2014, in Paris.

Dhaka: Some victims of Bangladesh's worst industrial disaster said on Monday they have still not received promised compensation, days after a deadline for payments from a multi-million dollar fund backed by Western retailers.

Victims, many of whom suffered horrific injuries when the Rana Plaza garment factory collapsed last year killing 1,138 people, said they feared authorities had bungled payments they were supposed to receive by April 23.

"I am still staying at the hospital and am running short of money," said Rehana Akhter, 22, who lost her left leg in the disaster.

"Still no one has said whether I will get the compensation or not. If I don't get the money I'll have no choice but to start begging," she said.

"I am not alone. A lot of Rana Plaza victims haven't got any money. I think some people may have stolen our compensation."

It is unclear how many victims have not been paid, but a Bangladesh government team helping to coordinate the payments said it has received complaints from around 50 victims.

A compensation fund managed by the International Labour Organisation (ILO) started making its first payments of $640 for each of the survivors and families of the deceased last week.

Western retailers have contributed just $15 million to the proposed $40-million fund which promised to compensate around 3,000 families of the dead and injured.

Anxiety over the payments underlines the desperate situation facing many of the victims who are still too injured and traumatised to work.

Mojtaba Kazazi, head of the ILO's Rana Plaza Claims Administration, said payments have been delayed for "a number of victims" because required personal details have not been provided.

"A number of claimants have already contacted us and we are arranging for their payments," he said in an email, urging victims not to panic.

Promoted
Listen to the latest songs, only on JioSaavn.com
Unions and victims marked the one-year anniversary of the disaster last week with protests, accusing retailers of "forgetting and failing" victims.