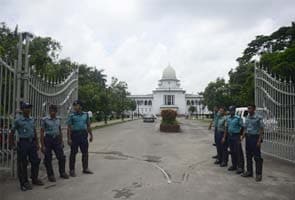 Dhaka: Bangladesh's biggest right-wing party Jamaat-e-Islami was today banned from contesting future polls by a court in Dhaka which cancelled its registration in a landmark ruling, leaving the once-most powerful fundamentalist party with an uncertain future.

The bench of justices M Moazzam Husain, M Enayetur Rahim, and Quazi Reza-Ul Hoque passed the judgement accepting a writ petition that challenged the legality of Jamaat-e-Islami's registration as a political party.

In the petition, they said Jamaat-e-Islami was a religion-based political party and it did not believe in independence and sovereignty of Bangladesh.

Today's verdict comes at a time when the demand for outlawing the party, blamed for war crimes during the 1971 liberation war against Pakistan, was mounting.

Promoted
Listen to the latest songs, only on JioSaavn.com
Several top Jamaat leaders, including its 91-year-old supremo Ghulam Azam, were recently sentenced either to death or to long jail terms for masterminding atrocities during the war.