Images of the new campaign which have gone viral on Twitter, feature young child models holding teddy bears that appear to be bondage gear. 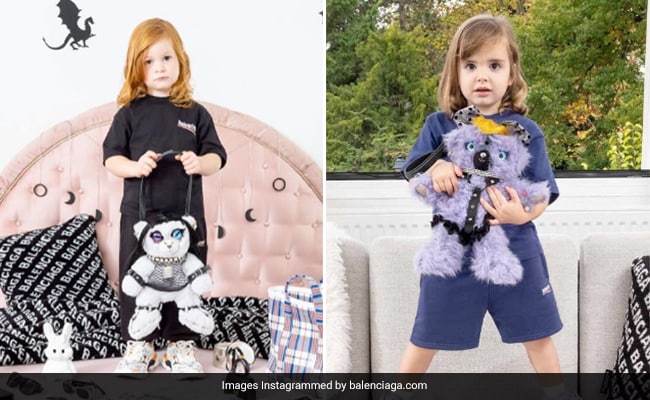 Luxury fashion brand Balenciaga is facing flak on social media after a new ad campaign featuring children and bondage-themed toys has been deemed as ''inappropriate'' and ''disturbing'' by several users. Images of the new campaign which have gone viral on Twitter, feature young child models holding teddy bears that appear to be bondage gear.

A Twitter user who goes by the username @DatCatDer posted two screenshots from the Balenciaga official website showing off images of little girls holding teddy bears, which appear innocent at first glance. Except, they are not.

In the first picture, a child is seen standing on a pink bed holding a teddy bear, wearing a fishnet top, collar with lock, and ankle and wrist restraints. The second picture features a girl standing on a sofa, holding a teddy bear wearing a leather chest harness and collar. Both these photos are being used to promote the site's holiday gift shop.

Twitter users have called out the campaign and have been slamming the brand while questioning the appropriateness of the photos featuring the bondage teddy bears. One user wrote, "Frightening how many adults must have been involved in this... parents, photographers, creative directors, copywriters, web designers, design agency staff, producers, managers, advertisers... and not one of them thought 'hang on a minute?"

Another commented, "It's the front page of their website. Scared, confused little girls on beds with toys dressed in adult sex shop fetish gear. This photoshoot must have been through dozens of people before being placed Front Of House - didn't any of them think it was wrong? Not one?"

Here are some other reactions:

Balenciaga is giving some unsettling vibes.

I thought people were trolling, but nope. It's real. Maybe this is why Balenciaga left Twitter. They don't want to be held accountable. Yes, these are children holding teddy bears dressed in bondage outfits. pic.twitter.com/zBlACUiZjo

"This destruction of innocence & normalization of fringe behaviours seems like an effort to make acceptable previously unimaginable scenarios (like men in women's prisons & shelters/children having "gender identities" / adult-dancing in libraries). None of this is acceptable," women's rights campaign group Keep Prisons Single Sex USA tweeted in response to the photos.

This destruction of innocence & normalization of fringe behaviors seems like an effort to make acceptable previously unimaginable scenarios (like men in women's prisons & shelters / children having "gender identities" / adult-dancing in libraries).
None of this is acceptable. https://t.co/elmVP63RMR

Last week, Balenciaga made headlines for a different reason when it deleted its profile from Twitter after Elon Musk's arrival. According to a Fortune report, Balenciaga did not elaborate on why it chose to delete its account and leave behind the 1 million followers it had on the platform.