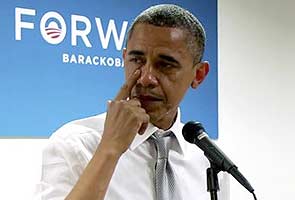 In this still image from a BarackObama.com campaign video, President Barack Obama wipes away tears as he thanks members of his campaign staff and volunteers in Chicago. Credit: The Associated Press.

Washington: In the most candid and emotional scene ever captured of Barack Obama on camera, the normally composed US President teared up as he told young campaign workers of his pride in them.

Obama's campaign team distributed on Thursday a YouTube video of the President's emotional tribute to his team at his Chicago headquarters the day before, hours after he won re-election to a second term.

"I am absolutely confident that all of you are going to do just amazing things in your lives," Obama said, standing alone at a microphone with a poster of his slogan "Forward!" behind him on the wall.

"What Bobby Kennedy called the ripples of hope that come out when you throw a stone in a lake, that is going to be you," Obama said, his voice still hoarse from days of campaigning.

The YouTube video was posted on BarackObama.com and was distributed by campaign staff on Twitter and email.

Obama campaign manager Jim Messina said in an email to supporters that the president was not just talking to campaign workers in the office, but to all the thousands of volunteers who built his huge grassroots movement.

"He was talking to all of you," Messina wrote in the email.

Obama, famed for his cool, "no drama" persona, has sometimes been accused of showing too little emotion in public and appearing aloof. He nonetheless got teary in stump speeches at the end of both his 2008 and 2012 presidential campaigns.

But he has rarely displayed the kind of raw emotion that was seen in the YouTube video.