Heinz-Christian Strache, 49, insisted he was the "victim of a targeted political attack", which had used illegal means to entrap him. 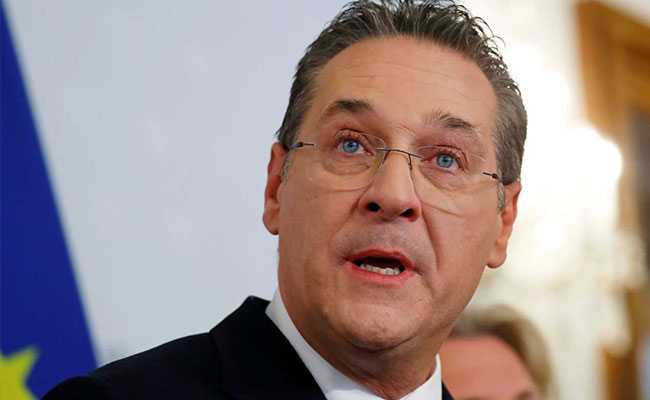 Heinz-Christian Strache is a key figure of the European far-right. (Reuters)

Chancellor Sebastian Kurz will make a televised statement from the chancellory building on the affair at 19:45 (17:45 GMT), with thousands of protesters already gathered outside to demand the government as a whole resigns.

Speculation is rife that Kurz may seek further ministerial changes as the price of continuing his coalition with the far-right Freedom Party (FPOe), or that he may push for fresh elections.

Media reports emerged on Friday alleging that Strache promised public contracts in return for campaign help from a fake Russian backer he met on the island of Ibiza a few months before 2017's parliamentary elections in Austria.

On Saturday Strache, 49, insisted he was the "victim of a targeted political attack", which had used illegal means to entrap him, but that he was leaving in order to avoid further damage to the government.

In the recordings Strache and his party's group leader in parliament, Johann Gudenus, are seen discussing with a woman purporting to be the niece of a Russian oligarch how she can invest in Austria.

Strache insisted on Saturday that he had not met the woman again after the meeting in the villa, nor did his party receive any funds from her.

"What I said, seen from a sober point of view, was a catastrophe," he said.

"Yes, it was stupid. Yes, it was irresponsible. Yes, it was a mistake," he said, describing what he did as "alcohol-influenced macho behaviour".

He appeared close to tears as he apologised to his family, friends and supporters, in particular his wife for trying to impress his "attractive host".

Strache also announced that he was stepping down as FPOe head, with Transport Minister Norbert Hofer taking over the party leadership.

Gudenus has also resigned from all his political positions.

In the recordings, the woman posing as an oligarch's niece says she specifically wants to gain control of the country's largest-circulation tabloid, the Krone Zeitung.

Strache is seen suggesting that new owners could make staff changes at the Krone and use the paper to help his Freedom Party (FPOe) in its election campaign.

He goes on to suggest the woman would then be able to gain access to public contracts.

According to the newspapers, Strache says that there would be no resistance among the Krone's editorial staff as "journalists are the biggest whores on the planet".

Both the newspapers that published the footage say they don't have any firm information over who set up the elaborate sting.

Elsewhere in the video Strache evokes the possibility of privatising part of Austria's public broadcaster ORF and says he would like Austria's media landscape to resemble that of neighbouring Hungary.

Hungary's right-wing nationalist Prime Minister Viktor Orban has overhauled the country's public media into a government propaganda organ while allies have steadily bought up swathes of the private media sector.

The FPOe has mounted repeated attacks on the ORF's coverage, accusing it of being biased against the party.

In the video Strache also appeared to hint at possible ways political donations could be made to a foundation linked to the FPOe and not to the party directly, apparently in order to escape legal scrutiny.

The scandal has already prompted international reaction, with German Chancellor Angela Merkel's preferred successor Annegret Kramp-Karrenbauer saying it showed that right-wing populists were prepared to sell out their country's interests for their own well-being.

"These people must not gain positions of responsibility in Europe," German media quoted her as saying.

In recent weeks Kurz has already had to defend the FPOe's presence in the government after a string of revelations about extremist sympathies in the party's ranks.

The most prominent recent example was an FPOe vice-mayor who had to resign after writing a poem comparing migrants to rats.

The putative link to Russia in the scandal is particularly embarrassing as the FPOe has a cooperation agreement with Russian President Vladimir Putin's United Russia party.

The perception of closeness to Russia wasn't helped by Putin attending the wedding of Foreign Minister Karin Kneissl -- nominated by the FPOe -- last summer.

FPOe Interior Minister Herbert Kickl was also at the centre of a row over raids on the BVT domestic intelligence agency in February 2018 during which numerous documents were seized, raising fears among Austria's Western partners about the possibility of leaks to Moscow.

Strache succeeded the mercurial Joerg Haider as leader of the party in 2005.

He flirted with neo-Nazism in his youth, but as leader had sought to clean up the party's image and make it more electable.