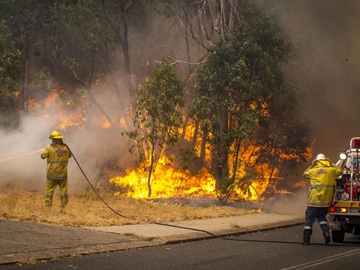 Sydney: A man has died defending his home from an intense wildfire that razed wooded hills near Australia's west coast city of Perth, destroying 46 houses.

The 62-year-old man collapsed and died on the roof of his home in suburban Hovea on Perth's eastern fringe on Sunday. He was believed to be hosing water onto his roof to protect it against embers, state fire service spokesman Allen Gale said Monday.

The house was not damaged, Gale said.

Erractic winds whipped up 20-meter (65-foot) flames. The fire destroyed 46 houses and badly damaged another home in a picturesque region known as the Perth Hills, where homes are scattered through eucalyptus and jarrah forests, Gale said.

Four people remained unaccounted for at Parkerville, the village where the fire started and four homes were burnt down, Fire Commissioner Wayne Gregson said.

"It could well be that some individuals have been victims of the fire," Gregson said.

The wildfire risk has been heightened by heat wave conditions on the west coast. Perth's temperature reached 43 degrees Celsius (109 degrees Fahrenheit) on Saturday, the city's hottest day in six years.

About 275 firefighters on Monday continued to fight the blaze which has burnt through about 350 hectares (865 acres) of woodlands and has been contained since Sunday night.

Firefighters' battle to keep the fire within containment lines was helped by cooler conditions. Temperatures in the hills region peaked at 41 degrees Celsius ( 106 F) on Sunday, but a sea breeze pushed the forecast maximum down to less than 30 degrees Celsius (86 F) on Monday.

Gregson said there was nothing his team of 385 firefighters could have done to save more houses.

Promoted
Listen to the latest songs, only on JioSaavn.com
"When you have a fire front of the magnitude they had yesterday, it was unassailable," Gregson said.

The service said two firefighters were treated for heat exhaustion.