Alek Sigley -- one of a handful of Westerners living and studying in North Korea -- disappeared without a trace around June 23, prompting a week of deep concern and frantic speculation about his fate. 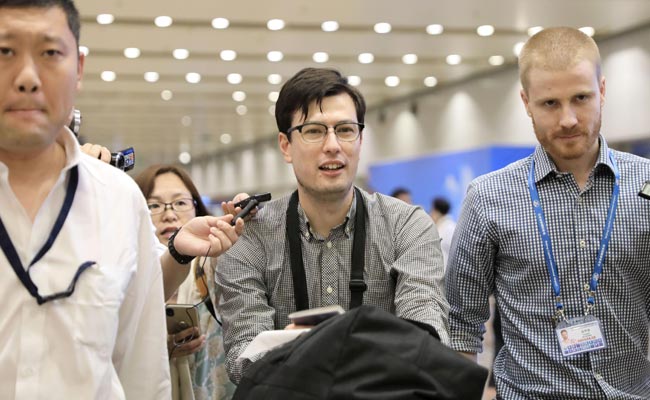 Alek Sigley has been released from detention in the Democratic People's Republic of Korea.

A 29-year-old Australian student detained in North Korea surfaced in Beijing on Thursday, saying he felt "great" after being released.

Alek Sigley -- one of a handful of Westerners living and studying in North Korea -- disappeared without a trace around June 23, prompting a week of deep concern and frantic speculation about his fate.

For days Sigley's family received no word about his whereabouts or wellbeing, stoking fears he may have been the latest in a long line of foreigners to become entangled in North Korea's police state.

He went to the Australian embassy and was later seen again at the airport, where he smiled again and waved at reporters. He was expected to travel to Japan, where his wife still lives.

Earlier, Australian Prime Minister Scott Morrison told lawmakers that Sigley had "been released from detention in the Democratic People's Republic of Korea" and that "he is safe and well".

Sigley's father Gary, a professor of Chinese and Asian studies, told media in Australia that the family was "extremely pleased he is safe and sound".

The father admitted he had missed a call from his son because he had been busy "shopping", but hoped to give him a "big hug and kiss" soon.

Trump was intimately involved in the case of University of Virginia student Otto Warmbier, who was imprisoned during a tour of the authoritarian state in 2016.

Doctors said Warmbier suffered severe brain damage while in detention, fell into a coma and died days after arriving back in the United States, aged 22.

Sigley was much more familiar with the country and spoke fluent Korean.

He ran tours to North Korea and a number of social media sites, which usually had a stream of apolitical content about life in one of the world's most secretive nations.

His blog posts focused on everyday Pyongyang -- everything from the city's dining scene to North Korean app reviews.

"He is always trying to demystify North Korea, unlike the typical Western media. He tries to understand the people there," his 26-year-old Japanese wife, Yuka Morinaga, had said.

The pair married in a lavish ceremony in Pyongyang last year.

The case was complicated by Australia's lack of diplomatic representation in North Korea.

Morrison thanked Sweden for its help in securing Sigley's release.

Earlier this week Swedish special envoy Kent Harstedt travelled to Pyongyang, where he raised the issue with North Korean authorities.

"I would like to extend my deepest gratitude to Swedish authorities for their invaluable assistance in securing Alek's prompt release," Morrison said, hailing it as a triumph of "behind the scenes" diplomacy.