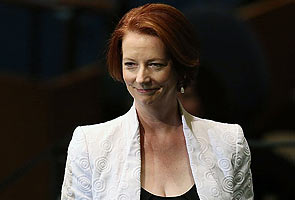 Canberra, Australia: Australian Prime Minister Julia Gillard delivered a historic national apology in Parliament on Thursday to the thousands of unwed mothers who were forced by government policies to give up their babies for adoption over several decades.

More than 800 people, many of them in tears, heard the apology in the Great Hall of Parliament House and responded with a standing ovation.

"Today this Parliament on behalf of the Australian people takes responsibility and apologizes for the policies and practices that forced the separation of mothers from their babies, which created a lifelong legacy of pain and suffering," Gillard told the audience.

"We acknowledge the profound effects of these policies and practices on fathers and we recognize the hurt these actions caused to brothers and sisters, grandparents, partners and extended family members," she said.

"We deplore the shameful practices that denied you, the mothers, your fundamental rights and responsibilities to love and care for your children," she added.

A national apology was recommended a year ago by a Senate committee that investigated the impacts of the now-discredited policies.

Unwed mothers were pressured, deceived and threatened into giving up their babies from World War II until the early 1970s so they could be adopted by married couples, which was perceived to be in the children's best interests, the Senate committee report found.

The seven-member Senate committee began investigating the federal government's role in forced adoption in 2010 after the Western Australian state parliament apologized to mothers and children for the flawed practices in that state from the 1940s until the 1980s.

Western Australia was the first of five state and territory governments to apologize for forced adoption.
Australia has eight such governments.

Roman Catholic hospitals in Australia apologized in 2011 for forcing unmarried mothers to give up babies for adoption and urged state governments to accept financial responsibility.

Catholic Health Australia, the largest nongovernment hospital operator in Australia and which provides 10 percent of the nation's hospital beds, said the practice of adopting out such children to married couples was "regrettably common" from the 1950s to the 1970s.

Adoption in Australia is mostly controlled by state laws, but the report found that the federal government had contributed to forced adoption by failing to provide unwed mothers with full welfare benefits to which a widow or deserted wife would have been entitled until 1973.

Australian adoptions peaked at almost 10,000 a year in 1972, before rapidly declining. The report found that decline could reflect the availability of welfare, the use of oral contraceptives and the legalization of abortion.

Promoted
Listen to the latest songs, only on JioSaavn.com
Among unwed mothers, adoption rates were as high as 60 percent in the late 1960s, the report said.

The committee could not estimate how many adoptions were forced but said they numbered in the thousands.