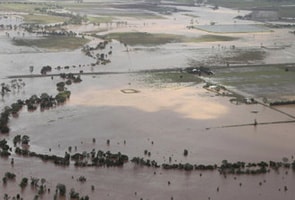 Brisbane: Heavy rain prompted new flood warnings in Australia even as thousands of volunteers cleaned up the gooey mess coating homes and streets in its third-largest city on Saturday.

Four states had flood warnings due to overflowing rivers and rain, while Queensland worked to recover from its deadly, weekslong disaster. Large parts of the vast state are still under water and some places are still on alert for flooding.

In Brisbane, the water that swamped entire neighborhoods has mostly receded, leaving behind a thick, putrid sludge.

About 7,000 residents joined 600 military personnel in what was dubbed "Salvation Saturday" to shovel, mop and sweep away the mess after the Brisbane River overflowed earlier this week.

Mayor Campbell Newman praised the overwhelming turnout. "Everybody rolls up their sleeves in this town," Newman said.

The volunteers were given mops, garbage bags and cleaning supplies before being bused to the areas of Brisbane most in need.

Sue Pearson, who lives in a mostly unaffected part of the city, came to a volunteer center with her husband and two children.

"We couldn't believe what we were seeing on television and thought we wanted to give up Saturday to come help and do what we could," Pearson told Sky News.
"So we grabbed a few brooms and spades and came down here today."

More than 30,000 homes and businesses in the state capital were flooded, and the mayor said complete cleanup of the city would take months and reconstruction up to two years.

More than 28,650 properties still lack power, energy supplier Energex said. Some parts of the electricity network were flooded or washed away, but the receding waters will allow better access to the infrastructure so power can be restored to more properties Saturday.

The floods have caused 26 deaths in Australia's northeast since late November, and 28 others are missing, most of them from a flash flood that hit towns west of Brisbane on Monday.

Flooding rains Friday spread farther south along Australia's east coast, forcing thousands of people to be evacuated from their homes in Victoria state and the island state of Tasmania.

Some towns were all but abandoned as major flood alerts were issued for five rivers in Victoria. Three towns in northwest Tasmania were evacuated after an entire summer's average rainfall fell in a single day.

An economist has estimated the Queensland floods' cost could be as much as $13 billion, or 1 percent of gross domestic product, in Australia's 1.3 trillion Australian dollar ($1.29 trillion) economy.

Even more frightening for farmers is the Bureau of Meteorology's prediction that rain could last through March due to the cool conditions in the central equatorial Pacific Ocean associated with the current La Nina -- a weather system known for producing heavy rains.
Comments
Brisbane floodsAustralia floods