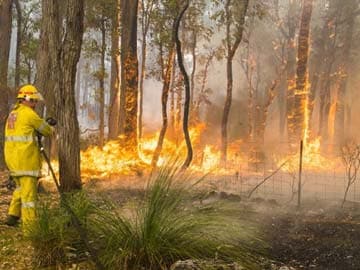 This handout photo taken on January 12, 2014 and supplied by Australia's Department of Fire and Emergency Services (DFES) shows firefighters working to contain wildfires in the Stoneville area, a suburb east of Perth in the state of Western Australia

Sydney: Australian authorities warned on Tuesday of some of the worst fire danger since a 2009 inferno which killed 173 people, with most of the continent's southeast sweltering through a major heatwave.

"These next four days promise to be amongst the most significant that we have faced in Victoria since Black on Saturday," said acting state premier Peter Ryan.

Tens of thousands of firefighters were on standby, and 1,290 brigades were in a "state of high preparedness", he added, with the peak danger day expected on Friday when very strong winds are forecast.

"We are alive to the fact that we face these challenges over the course of these coming four days, including today. But on the other hand we are well prepared, we are ready to go," Ryan said.

A grass-fire tested crews early at Little River west of Melbourne, racing out of control and triggering a brief emergency alert before water-bombing aircraft managed to bring it under control.

Victoria and neighbouring South Australia state are bracing this week for what forecasters are describing as a "severe to extreme heatwave conditions", with successive days of temperatures above 40 degrees Celsius (104 F) expected.

A similar heatwave struck before the 2009 fires, Australia's worst natural disaster of the modern era in terms of casualties. An estimated 374 people died during the preceding heatwave, with another 173 fatalities in the firestorm itself.

If the forecasts come to pass, Melbourne will see its longest stretch of hot weather in 100 years.

On Tuesday, players at the Australian Open were sweltering.

A ball boy collapsed and water bottles melted on court as the mercury soared above 40 degrees Celsius.

Experts said the outlook had echoes of 2009.

"The forecast weather patterns are quite reminiscent of conditions before Black on Saturday, with severe and expansive high temperatures across the southern part of the continent and the presence of low pressure cells on either side of the country in the tropics," said bushfire specialist Jason Sharples from the University of New South Wales in Canberra.

"The combination of high temperature and low relative humidity means that the moisture content of vegetation will be very low. Hence, if a bushfire was to start, it would be expected to spread more rapidly than normal."

Hospitals and emergency authorities are on standby for an influx of heat-related call-outs, with Ambulance Victoria warning it would be "stretched".

"We have recalled all available staff, every available vehicle will be on the road," said operations manager Paul Holman.

Holman said 11 people were treated for heat exposure on Monday, including an elderly man who collapsed while playing lawn bowls.

The heat system has moved across Australia from the west coast, where a wildfire in Perth razed 52 homes on Sunday and claimed the life of one man as he prepared his home for the flames.

Hundreds of residents sheltering in evacuation centres since they were forced to flee their homes prepared to return on Tuesday, with many fearing what they will find.

"It's just like, what's going to be there? What will be left?" Stoneville resident Fleur Adams told the Australian Broadcasting Corporation.

Promoted
Listen to the latest songs, only on JioSaavn.com
Wildfires and hot weather are common in Australia's December-February summer months, but the current event is unusual because it is occurring in what is supposed to be a neutral period in the El Nino pattern bringing average conditions.

El Nino, a phenomenon characterised by usually warm ocean temperatures in the central and eastern equatorial Pacific, is generally associated with hotter, drier conditions in Australia.