At This Underwater Restaurant, A "See What You Eat" Menu, Algae Dessert

From the outside, the giant concrete monolith juts out from the craggy shoreline, while its other end tips down into the North Sea. 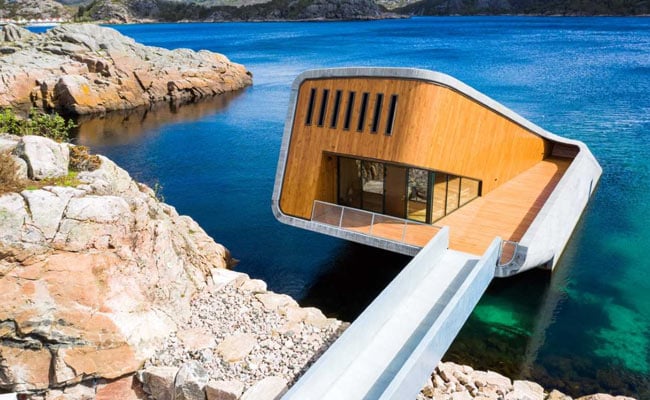 The restaurant serves Poseidon's delicacies in an architectural showpiece underwater.

For the chef and diners alike, each meal beneath the waves at Europe's first underwater restaurant is a thing of wonder.

"We have this small window next to the kitchen and every time some special kind of fish comes by, I always start thinking about how it would taste," says chef Nicolai Ellitsgaard.

The aptly named new restaurant Under opened a few weeks ago in Lindesnes on Norway's southern tip.

It serves up Poseidon's delicacies in an architectural showpiece that stretches down five metres (15 feet) underwater, offering a unique closeup of ocean life. 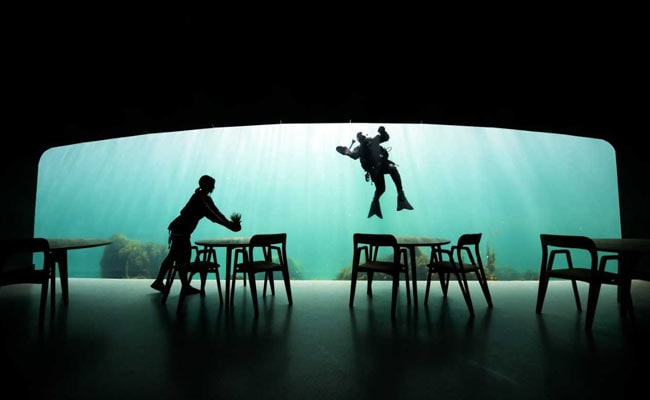 A worker prepares the dining tables as a diver cleans the outside of a viewing window of Under, a restaurant that is semi-submerged restaurant

From the outside, the giant concrete monolith juts out from the craggy shoreline, while its other end tips down into the North Sea.

The 36-square-metre (398-square-foot) window -- "like a sunken periscope" in the words of its designers -- offers a panoramic view of the ever changing live aquatic show.

In Norwegian "'Under' means it's under, like submerged, underwater, and it also means a sense of wonder," says Stig Ubostad, who co-owns the eatery with his brother, Gaute. 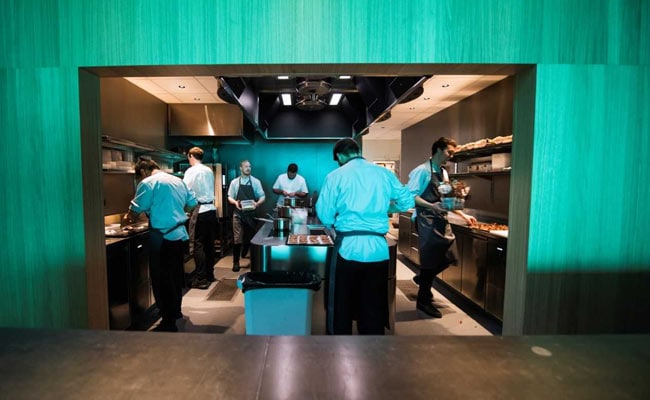 kitchen workers prepare food at Under, a restaurant that is semi-submerged beneath the waters of the North Sea in Lindesnes

"It is without doubt the largest one in the world and the only one in Europe."

There are no clown fish or sharks, like at other underwater restaurants in more tropical locations such as the Maldives or Dubai.

Rather, it is in this simple, but no less spectacular forest of kelp that cod, pollock and wrasse swim past depending on the season, with occasional visits from their predators, seals and the large eider sea ducks.

"It's an area on the southern tip where the brackish water from the east meets the salty water from the Atlantic, so the richness of the species is very high," says Trond Rafoss, a marine biologist involved in the project.

In addition to its distinctive architecture and fine dining, Under wants to shine a spotlight on environmental issues. 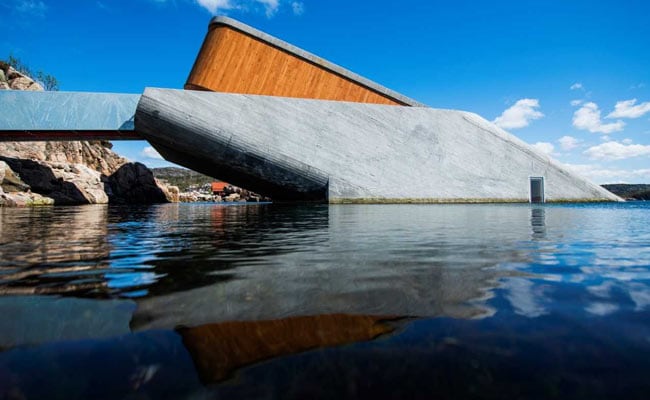 View of Under, a restaurant that is semi-submerged beneath the waters of the North Sea in Lindesnes

The international waiting staff are trained to provide guests with information about the aquatic show they are watching.

"The guests are on an adventure. They are exploring the nature themselves, because this is not an aquarium.

"The fish might look at us as an aquarium because what's happening outside here is under natural control," Rafoss says.

"You will never be disappointed, nature is never disappointing."

The restaurant is a 34-metre monolith designed by Norwegian firm Snohetta, known for its celebrated buildings such as the Oslo Opera and the 9/11 Memorial Pavilion in New York.

It can serve up to 40 diners during its one sitting a day, five nights a week.

In the kitchen, Danish chef Nicolai Ellitsgaard and his staff let their imaginations run wild when creating seasonal menus based primarily on what the sea has to offer, including a dessert composed of five different types of algae collected from a nearby shore.

The restaurant however is probably not for everyone's budget. 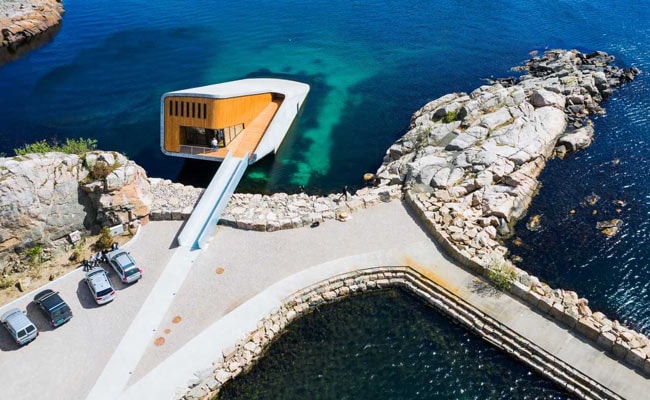 an aerial view of Under, of the North Sea in Lindesnes near Kristiansand, some 400 km south west of Oslo.

Under is nonetheless fully booked for the next six months.

"The wonder is when you come here from the surface and you get into this magnificent light," says Dag Jacobsen, a 59-year-old professor, who dined there with his wife and another couple.

"You see this kind of underwater light... The greenish, bluish water and all the interior here is also quite tuned to the sea as well, so you get a feeling of just diving into the sea."

"It is impossible to differentiate between the senses, your taste, sight, sound -- everything is connected so it influences the way we experience the food," he adds, admitting he was "a bit sceptical" at first but was ultimately sold on the concept.

For those who might worry about a catastrophe befalling the underwater structure, the owner says they can rest assured.

The 26-centimetre (10-inch) thick plexiglass window is designed to withstand storms, and the entire structure, with its thick concrete walls, is built to resist pressure and shocks from the rugged sea conditions.

"We've been through so many consultants I think it's safer than anything else," says Ubostad.