At Saudi Base, Warplanes Roar Off to Pound Yemen Rebels 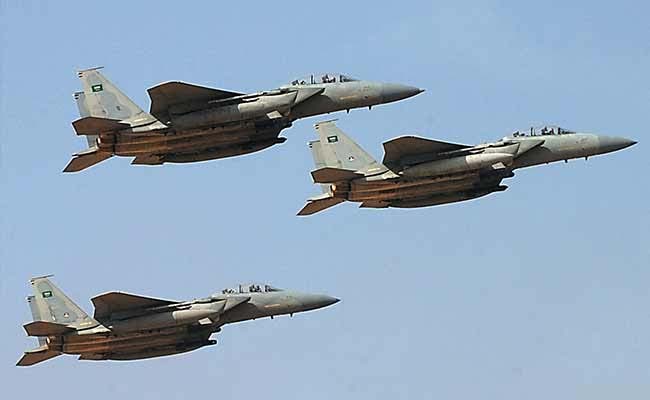 Saudi warplane roars off into the harsh sun. (File Photo)

Khamis Mushait: At a sprawling air base in southern Saudi Arabia, another warplane roars off into the harsh sun carrying a payload of laser- and GPS-guided bombs to drop over Yemen.

Roughly 100 kilometres (60 miles) from the Yemeni border, the King Khalid Air Base near the city of Khamis Mushait is at the forefront of the Saudi-led intervention against Shiite Huthi rebels in Yemen.

Launched in March, the campaign aims to support Yemen's internationally recognised government in its fight against the Iran-backed rebels who seized much of the country, including the capital Sanaa.

A coalition of mainly Gulf Arab nations led by Riyadh has for months been pounding the rebels almost daily with air strikes, many of them launched from this base in the mountainous southwestern Asir province.

Pilots, like Captain Khalid of the Royal Saudi Air Force, collect helmets, green vests and pistols from a locker room before walking through a wooden door to the tarmac, where warplanes from coalition countries stand by for missions.

Saudi Arabia's US-made F-15 fighters sit next to a desert-shaded Sukhoi from Sudan and a French-made Mirage from Qatar.

Standing beside his F-15, Khalid says his mission is to protect Yemeni civilians from the Huthis and their allies.

"We protect our country as well," the 32-year-old adds, speaking to AFP during the first visit by Western journalists to the base since the launch of the campaign in Yemen.

Khalid spoke under rules that forbid him from giving his family name and which required the Saudi military to vet the interview as well as AFP's video and photographs from the base.

Khalid has spent nearly a decade in the Saudi air force. He took part in the country's last war against the Huthis, when Saudi troops were in action for several weeks in 2009 after a rebel incursion over the southern frontier.

He says he has flown countless sorties in this latest conflict -- between 150 and 200 hours of flight time.

The coalition has sent ground troops to Yemen to support President Abedrabbo Mansour Hadi's forces, but the main focus has been on air strikes.

It has not released recent figures on how many strikes have been carried out but the air campaign has been intense.

Rights groups have repeatedly criticised the air war over civilian deaths, accusing the coalition of not doing enough to avoid non-military targets.

In a recent report, Human Rights Watch estimated that 2,500 Yemeni civilians have died in coalition air raids since March. The watchdog alleged that at least 10 strikes that killed 309 civilians broke the laws of war.

The United Nations says more than 5,700 people have been killed in Yemen, about half of them civilians, since March when fighting intensified.

The coalition vehemently denies reports of indiscriminate bombing and at the King Khalid base pilots say they take every precaution.

"We always use guided bombs to make the weapon more precise," Captain Khalid says, his words difficult to hear as another fighter takes off, shaking the insides of those standing near the runway.

"We target the military buildings and troops."

Khalid says the crew never release their weapons "unless we are 100 percent sure" of the target, but he and others in the coalition accuse the Huthis and their allies of using civilians as shields.

A source familiar with the operation told AFP the coalition was "making an effort" to respect international law, but it is "probably not 100 percent" successful.

The close proximity of civilian and military facilities means "it's not easy to target", the source said.

Khalid says he has felt no danger during his missions and, so far, coalition air forces have only reported a single loss.

A Moroccan pilot died in May when his F-16 fighter crashed in the Huthi stronghold of Saada. Rebels said they shot it down but the coalition blamed human error or a technical fault.

Khamis Mushait, the city near the Saudi air base, came under attack in June from a Scud missile launched from Yemen but a Patriot missile shot it down, the coalition said.

The air war has been so intense that the United States last month approved a $1.29 billion deal to replenish the Saudi air force's depleted arsenal.

US forces have also assisted the coalition with aerial refuelling and intelligence.

A few Americans in civilian clothes could be seen inside the base, which resembles a small city with its own post office, bank, mosques, convenience store and laundry, on streets decorated with large model warplanes.