At Least 64 Killed, 180 Injured In Airstrike In Ethiopia's Tigray Region

Ethiopia's army spokesman said Thursday that the military carried out the attack on Togoga, but said rebel fighters were the target. 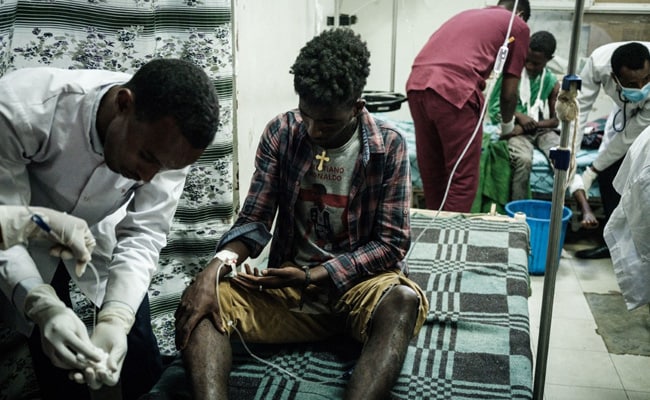 The United Nations has called for an urgent investigation into the strike.

At least 64 people were killed and 180 were injured in an air strike on a market in Ethiopia's war-torn northern Tigray region, a local health officer said Thursday, as the army denied targeting civilians.

Details of the bloody attack on Togoga town, 30 kilometres (18 miles) northwest of the regional capital Mekele, on Tuesday were slow to emerge partly because soldiers initially blocked emergency workers from accessing the area.

By Thursday, hospitals in Mekele were treating at least 73 people, including young children.

Victims at the hospital suffered shrapnel wounds and burns, and in some cases doctors were forced to perform amputations to save lives.

The Ethiopian military admitted carrying out the attack but said it targeted rebel fighters, not civilians.

The health officer told AFP at least 64 people had died.

"The air strike was in the market area, so many, many people were injured," said Mulu Atsbaha, an advisor to the Tigray regional administration on maternal and child health.

He said the toll had been collated from residents of Togoga and "confirmed with local leaders".

Survivors spoke of huge devastation as aerial explosions tore through the busy market around 1 pm, killing and injuring dozens, reducing nearby homes to rubble and burying people under the ruins.

"We do not accept that this operation targeted civilians," Colonel Getnet Adane told AFP.

"It is a clear fact that both the remnants of the TPLF and its militia dress in civilian clothes," he said, referring to the renegade former regional leadership.

Genet also denied the army targeted a market, adding that while it was market day on Tuesday, "in Ethiopia, people go to the markets in the morning, and by the afternoon they are usually deserted."

The attack came as vote counting was under way following Monday's national elections in Ethiopia.

No vote was held in Tigray because of the conflict, and the region has seen an upsurge in fighting and rebel advances in recent days.

They included the brief occupation of the key town of Adigrat in the far north, and Wukro, further south nearer Mekele, residents told AFP, while heavy shelling was reported to the north of the regional capital on Thursday morning.

Flights in and out of Mekele were disrupted for a second day Thursday.

But nearly eight months later, fighting continues, which has triggered a humanitarian crisis with the UN warning 350,000 people are on the brink of famine.

The strike has provoked international outrage, with the United States calling it a "reprehensible act".

The European Union said the blocking of ambulances from reaching the scene would be a grave violation of international law, while the United Nations called for an urgent investigation into the strike.

"The Ethiopian government does not target civilians. It is only moving to pick up people wanted by the law," he told reporters on Thursday.

Dina complained that international attention was focused on Tuesday's deadly attack, rather than Monday's polls, saying foreign powers "didn't care to give statements on this historical election".