At least 49 killed in Saturday's protest clashes in Egypt: ministry 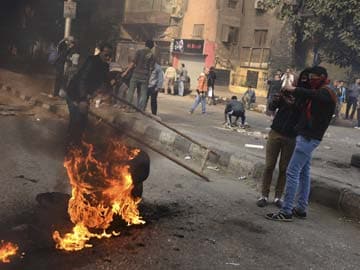 Supporters of the Muslim Brotherhood and ousted Egyptian President Mohamed Morsi close the road during clashes with riot police in Cairo.

Cairo: The death toll from clashes during protests in Egypt on Saturday rose to 49, the Health Ministry said on Sunday, in violence that erupted on the third anniversary of the popular uprising which toppled autocrat Hosni Mubarak.

Nearly 250 people were wounded in Cairo and several other provinces, the ministry said.

Promoted
Listen to the latest songs, only on JioSaavn.com
The Interior Ministry said in a statement on Sunday that it had arrested 1,079 "rioters" in possession of rifles, petrol bombs, fireworks, and other weapons. It said that a number of policemen were injured in clashes.

Egypt has been gripped by political upheaval and street violence since Mubarak's was ousted.
© Thomson Reuters 2014