At Least 4 Killed In Shooting In New York: Reports

The shooting happened in the Brooklyn borough of the city and several other people were wounded, NBC and other news outlets reported. 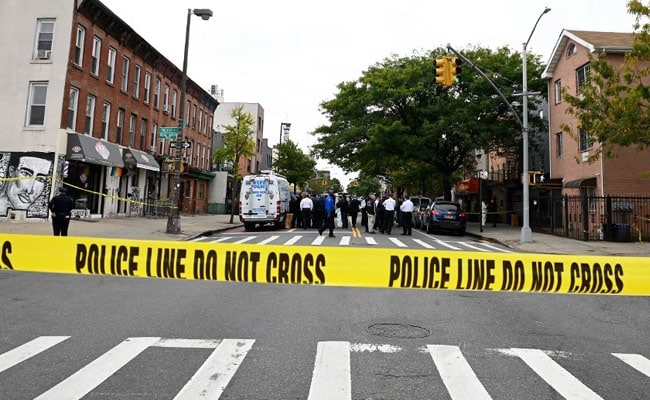 At least four people died and three were wounded in a shooting at an unlicensed private social club in New York early Saturday, police said.

No one has been arrested over the early morning shooting in Brooklyn, and the motive and exact circumstances are not known, a New York police official told AFP.

Four men were pronounced dead at the scene, while two other men and a woman suffered non-life threatening injuries, the police official said.

Shea told journalists at a briefing there was evidence of gambling, specifically cards and dice, and that preliminary investigations indicated that a minimum of 15 shots were fired.

Shea said it was too early to tell whether the dispute was gambling or perhaps robbery-related.

Two firearms were recovered and the police official said he "would not be shocked if we recovered more."

Homicide detectives were on the scene, and Shea said nothing indicated that the crime was gang-related.

The social club where the shooting took place is in the diverse Crown Heights neighborhood, and the victims ranged in age from 32 to 49.

The shooting comes one month after the city saw its lowest number of shootings of any September since the NYPD started its CompStat crime tracking program in 1994.

In a country plagued by gun violence, New York state has some of the strictest rules concerning purchasing, possessing and carrying firearms, particularly in the city and its suburbs.

Data from the Centers for Disease Control and Prevention dating to 2017 showed that the state's death rate due to firearms was 3.7 per 100,000 people.

The state legislature passed the Secure Ammunition and Firearms Enforcement (SAFE) Act in 2013, which among other provisions bans most assault weapons and large capacity ammunition magazines.

Earlier this year, new measures were introduced, including a ban on bump stocks -- which can allow faster shots -- and a longer mandatory waiting period to conduct background checks for some firearm sales.

The Giffords Law Center, which ranks states according to the strength of its gun laws, puts New York state at six out of 50.

According to the research center, 54 percent of the state's gun deaths are the result of suicide, also noting that gun violence there has a disproportionate impact on urban communities of color.

Later Saturday, another shooter opened fire at a church holding a funeral in a small town in New Hampshire, injuring several people before being taken into police custody.

A police official in the northeast state told AFP she did not know the gunman's motive or how many people had been injured.