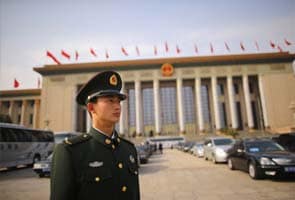 A paramilitary policeman stands guard in front of the Great Hall of the People, the venue of the 18th National Congress of the Communist Party of China, in Beijing.

Beijing: As the senior Communist Party official in one of China's most prosperous regions, Wang Yang is often cast as an agent of change, a potential force for economic and even political reform should he gain promotion to the party's highest rung later this week.

But the chief of the southern province of Guangdong appears to be distancing himself from that role while attending the party congress that will usher in China's once-in-a-decade top leadership transition.

When Wang spoke to reporters on Friday, he stuck to a well rehearsed script that could have come from any apparatchik.

"Because China has taken the strategic choice of reform and opening up, every member of the Chinese Communist Party, including myself, is a reformist - or else there would be no today," he told reporters.

"We will follow the themes of the 18th party congress to push for reform," he said. "As for the next steps for reform, General Secretary Hu Jintao has already clearly stated those, so I won't recite the report for you."

China's twice-a-decade party conclave, at which high ranking officials make speeches and hold rare press conferences, is providing a lesson into just how tightly the senior leadership controls the message it wants both the Chinese people and the outside world to hear.

At his speech at the opening of the congress on Thursday, outgoing President Hu spoke of the need for both political and economic reform, but stressed the Communist Party must remain in charge.

Everyone else has since read from the same script, evidence, political analysts said, that the party's over-arching goal remains the same: maintaining its tight grip on power.

Wang Yang, a Hu prot&#233;g&#233;, now appears to be a long shot to ascend to the Politburo Standing Committee. Likely to consist of just seven members, the body will steer the world's second-largest economy for the next five years.

Seen by many in the West as a beacon of political change, Wang lobbied for reform in Guangdong out of concern about the social impact of three decades of blistering development.

However, this approach drew criticism from party conservatives and Wang has more recently adopted the party's more familiar method of control and punishment to keep order.

But Wang would not have even made it as far as he has without expressing fealty to a party that brooks little dissent and no challenge to its rule.

"In the Chinese context he is a reformer, but that only takes you so far," said Tony Saich, a China expert at Harvard's Kennedy School of Government.

"The bottom line is all these people at heart are loyal Communist Party members, and most of the reforms that they see as being effective are all geared to ensuring the Communist Party's continued rule."

The only two certainties on the standing committee to be unveiled on Thursday are Xi Jinping, Hu's anointed successor, and Li Keqiang, tipped to be the next Premier. Both are considered at best cautious reformers.

One man who will probably make it onto the standing committee has a very different reputation that does not bode well for reform -- the dour, conservative North Korea-trained economist Vice Premier Zhang Dejiang.

Zhang, 65, saw his chances of promotion boosted this year when he was chosen to replace disgraced politician Bo Xilai as party boss of the southwestern city of Chongqing.

Zhang's appearance in front of almost 100 reporters was marked by a grave 25-minute speech in which he essentially repeated Hu's opening address to the congress, with the turgid and repeated use of Communist terminology.

"The whole report shone a light on the radiance of Marxism," Zhang said. "The entire report from start to finish showed that we must unswervingly follow the path of socialism with Chinese characteristics."

Yu Zhengsheng, Shanghai's party boss, is also viewed as a contender for promotion, and considered at least open to reform by virtue of running China's financial hub and most cosmopolitan city.

But Yu was mostly silent during an open "discussion" session of Hu's speech. When he finally answered a reporter's question on what he thought the most urgent political reform China needed to undertake, Yu was extremely cautious.

"These are the main points and direction of political system reform in the future. Done. Thank you."

Yu and Zhang did at least appear in front of the foreign media. Li Yuanchao, widely viewed as a reform-minded candidate for promotion, did not. Li, 61, oversees the appointment of senior party, government, military and state-owned enterprise officials as head of the party's powerful organisation department.

He has courted foreign investment and studied in the United States. Analysts are closely watching what happens to him this week as a sign of which way China's new leadership is likely headed.

"A much better indicator for reform will be (Li's) fate. He has implemented some political and administrative changes that were pretty radical by China's standards, and advocated for even more serious reform," said Duncan Innes-Ker, senior China analyst for the Economist Intelligence Unit.

Even if Li or Wang Yang don't make it onto the standing committee this time, they are, by Chinese standards, young enough that they may make the grade at the next congress in five years time, when the likes of Zhang and Yu will have to retire.

"My understanding is that (Li's) going to be made vice president and that gives him a status which is superior to the other regular politburo members, with an unconfirmed promise that he'll get in next in five years time," said Saich, the expert at Harvard, of Li Yuanchao.

"I think the understanding is that Wang Yang has a good shot in five years' time as well."