The new image shows that the asteroid struck by the spacecraft has left a trail of debris which stretches as far as 10,000 kilometres. 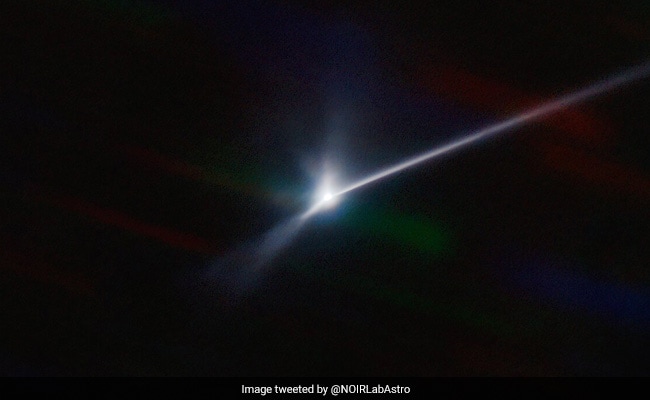 The telescope shows a debris trail stretching more than 10,000 km

Last week, a NASA spaceship struck an asteroid seven million miles away in order to deflect its orbit, succeeding in a historic test of humanity's ability to prevent a celestial object from devastating life on Earth. Two days after the impact, the after-effect of the historic test surfaced. The new image shows that the asteroid struck by the spacecraft has left a trail of debris which stretches as far as 10,000 kilometres.

A US team of astronomers observed the after-effect of the impact by using the 4.1-meter Southern Astrophysical Research Telescope or SOAR at the National Science Foundation NOIRLab's Cerro Tololo Inter-American Observatory in Chile. The telescope has captured a stunning picture of the comet-like plume blasted from the asteroid's surface.

The telescope shows a debris trail stretching more than 10,000 km (6,200 miles), and it is expected to get even longer until it disperses completely, and looks like other space dust floating around, reported BBC.

Teddy Kareta, an astronomer involved in the observation told BBC, "It is amazing how clearly we were able to capture the structure and extent of the aftermath in the days following the impact."

DART, launched by a SpaceX rocket in November 2021, has made most of its voyage under the guidance of NASA's flight directors. The Double Asteroid Redirection Test (DART) was managed by Johns Hopkins University Applied Physics Laboratory for NASA.

The dust trail will be observed in the coming weeks and months, reported the publication.