As Flames Engulfed Notre-Dame, Firefighters Helped Save Treasures Inside

Firefighters rushed in, looking for whatever they could grab and carry to safety, according to accounts by Paris officials and French media. 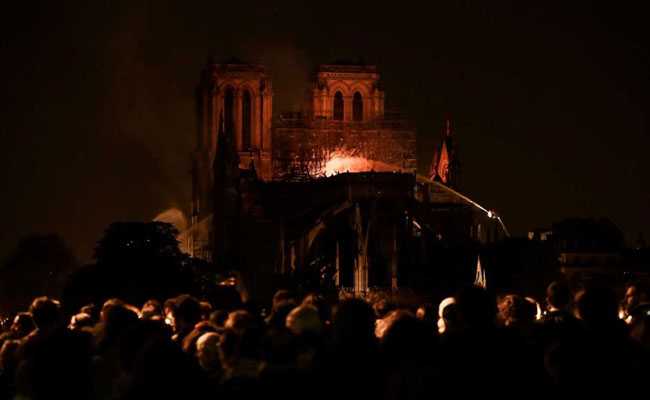 A huge fire swept through the roof of the famed Notre-Dame Cathedral in central Paris. (AFP)

There was little time to waste. The wood-and-lead roof was a crackling inferno overhead. The flames were now snaking down though the majestic woodwork inside the Notre Dame cathedral.

Very soon - just minutes maybe - the fire would begin threatening the artwork, liturgical items and priceless religious relics tucked throughout the warrens and alcoves of the cathedral.

Firefighters rushed in, looking for whatever they could grab and carry to safety, according to accounts by Paris officials and French media. The fire department chaplain - his glasses reflecting the orange flames - demanded to join them.

Then a human chain took shape, Paris' deputy mayor for tourism and sports, Jean-Francois Martins, told "CBS This Morning." It included Parisian officials, church caretakers, and the Rev. Jean-Marc Fournier, the fire chaplain who, hours earlier, had been preparing events for Easter week.

"We have avoided a complete disaster," said Maxime Cumunel, secretary general of France's Observatory for Religious Heritage. But he told the Reuters news agency that perhaps "5 to 10% of the artwork has probably been destroyed."

Among the items they salvaged, said French Culture Minister Franck Riester, was the crown of thorns that many worshippers believe was worn by Jesus before his crucifixion. Also recovered was a tunic once donned by Saint Louis in the 13th century - while Notre Dame was being built.

Both of those items are now in safekeeping at Paris cty hall nearby, and would ultimately join a convoy others soon to be taken to the Louvre Museum, Riester announced.

Etienne Loraillre, the editor of France's KTO Catholic television network, said the chaplain Fournier had a key role in saving the crown of thorns and other items. Fornier had been a military chaplain who served in Afghanistan, and in 2015 comforted survivors after a rampage at the Bataclan theater and northern Paris in which 130 people were killed.

A fire alarm was first triggered at 6:20 p.m. Monday, but security officials at the cathedral could not locate a blaze. To be on the safe side, though, the cathedral called off an evening Mass and evacuated the complex.

In another twist of good fortune amid the ruins, 19th century copper statues of the Twelve Apostles and four other biblical figures had been removed by crane from Notre Dame last week to be cleaned as part of an overall restoration project at the cathedral.

Sophie Grange, a spokesman for the Louvre Museum, told The Washington Post that it was not yet clear how many objects the Louvre would be receiving or how long they would stay.

Other immovable pieces that made it through the flames - such as the 8,000-pipe organ originally built in 1403 - will be carefully assessed in place for water damage.

The tally of what was lost, however, is already profound. It includes fragments of the remains of Saint Genevieve and Saint Denis, portions of which were installed in 1935 in architect Eugene Emmanuel Viollet-le-Duc's 19th-century spire, which collapsed at the height of Monday's blaze.

Historians emphasized that the cathedral itself was an emblem - and even a crucible - for a certain architectural style and the advancements that came with it. Notre Dame was perhaps the iconic gothic aspiration, said Samantha Herrick, a historian of medieval France.

"A lot of features of this church, while not unique, were new at the time," she said. "Stained glass was new, flying buttresses were new, Gothic architecture itself was new. This was a site of innovation."

For the moment, the most pressing question is the state of the cathedral's sprawling stained glass masterpieces - and particularly the three massive, multicolored rose windows originally installed in the 13th century and heavily restored 600 years later. Despite these subsequent restorations, the windows still contain some of their original medieval elements.

Images showed that the rose windows technically remained intact, but the condition of the materials was far from certain. "Clearly, they were damaged, but to what degree we don't yet know," said Karine Boulanger, an specialist in stained glass at the Sorbonne University in Paris.

"We can see they are still in place, but we don't know in which state they are in, at least in a detailed manner," she said. "Even if the fire didn't come all the way down into the cathedral itself, the heat itself was very intense. And the heat will have impacted the glass, as well as the material that keeps the glass panels together."

The architect Jean de Chelles designed and constructed the northern transept between 1245 and 1260. De Chelles then began the construction of the southern transept in 1258, but it was achieved by Pierre de Montreuil in the 1270.

For experts, what makes the monumental rose windows installed in the course of this construction unique is that there are few examples of medieval stained glass in Paris, at least outside of Sainte-Chappelle, a jewel box of a chapel in the shadow of Notre Dame on the Ilede la Cite.

But particularly dazzling is the scale of the rose windows. The north rose, for instance, reaches more than 42 feet in diameter, and south rose roughly more than 62, taking account of its additional skylight.

Herrick noted that the particular way in which portions of the cathedral collapsed were a testament to its Medieval identity, particularly vis-a-vis Notre Dame's lead roof.

"Ironically there's something ironic about that, as Medieval sources were constantly complaining about cost of keeping up lead roof," she said. "Fires were constantly happening in the period, and the things most likely to fall in that period were the roofs."

The estimated costs for renovating the cathedral are currently estimated at $180 million.

But the donation pledges from wealthy private sources led to some criticism of the French state, which some felt should shoulder more of the burden to preserve such an important piece of national and religious cultural heritage.

In the words of Olivier Gabet, the director of Paris's Musée des Arts décoratifs: "If Notre Dame is a symbol of France, of its history, of its art, it is also the property of the state. In that sense, if we can only rejoice in the generosity of great donors, we could only be proud that the State undertakes to finance this restoration fully, in these troubled times."

After the flames were put under control, a cross was still standing alone - but intact - in the chancel surrounded by charred walls.