As cruise ships get larger, are they any safer? 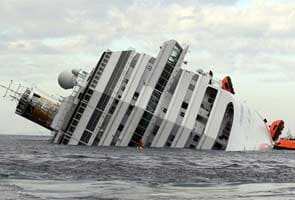 New York: The grounding and capsizing of the Costa Concordia has raised questions about the safety of the ever-increasing size of cruise ships. But experts say that these new megaships have the latest safety and navigation technology and pose little risk to passengers despite their gargantuan bulk.

The Concordia - a ship more than 250 yards (meters) long - was carrying more than 4,200 passengers and crew Friday night when it hit a reef off the Italian coast, flooded with water and listed to one side. At least six people died in the accident with another 16 unaccounted for, including two American passengers.

The investigation of the crash is focusing on the ship's captain, not its design.

Pier Luigi Foschi, CEO of Costa Crociere SpA, distanced his cruise line on Monday from the jailed captain, Francesco Schettino, saying that the captain "took an initiative of his own will which is contrary to our written rules of conduct."

The accident has more to do with training, oversight and adherence to policies than the design or size of the ship, said Carolyn Spencer Brown, editor of Cruise Critic.

"This was just sloppy," she said. "There's nothing more to the story than this was sloppy and unacceptable."

The Concordia is a little more than five years old and part of a recent trend to build bigger and flashier cruise ships that can carry more passengers than ever before.

The largest of these - Royal Caribbean's Allure of the Seas and sister ship Oasis of the Seas - were launched in the last three years and can carry more than 6,000 passengers. When the Titanic sank nearly a century ago, there were 2,200 people on board.

These larger ships are harder to maneuver and can't fit into all the channels frequented by smaller ships. Alan Wilson, editor of Cruise News Daily, equated it to the difference between driving a Greyhound bus and a tiny Volkswagen car.

But cruise lines and ship captains understand those limitations. Routes are carefully planned with these ships' size in mind.

"There are places they can't go," Wilson said. "They know where they can't fit the ships."

In the case of the Concordia, a safe route was put into the ship's navigation system, the company CEO said. The ship left that course only because the captain made an unauthorized deviation, he said.

Costa is owned by Miami-based Carnival Corp., which operates 101 ships under several brands including Carnival, Cunard, Holland America, Princess and Seabourn. The company said the Concordia would remain out of operation at least through November, causing the company $85 million to $95 million in lost bookings. Carnival also has a $30 million insurance deductible for damage to the ship and a $10 million personal injury deductible.

When an accident does happen, larger ships pose a greater challenge simply because of the sheer number of passengers.

Jack Hickey, a Miami attorney who has practiced maritime law for 32 years, said while cruise ship crews get some training on operation of lifeboats, overall safety training is usually an afterthought.

The sheer size of today's cruise ships only makes the lack of safety training worse, Hickey said, "because now, as opposed to 10 or 20 years ago, you are dealing with thousands and thousands of people. It's very difficult and dangerous to get off a ship like that."

"With size comes safety," said William Wright, senior vice president of marine operations for Royal Caribbean International and the first captain of Oasis of the Seas. Royal Caribbean operates seven of the largest 10 ships in the world.

Wright said these megaships are wider, more stable, have the latest navigation systems and more watertight compartmentalization than their predecessors.

Michael Crye, executive vice president of Cruise Lines International Association, the industry's trade association, said that the newer, large ships have better technology to communicate with passengers in case of an emergency, have life jackets in more central locations and carry lifeboats that can be boarded more quickly than prior models.

Promoted
Listen to the latest songs, only on JioSaavn.com
"As ships have gotten larger, the issues of safety must be planned into these ships," he said. "Along with bigger ships comes more responsibility to safety."

Since 2005, Crye said, more than 100 million people have taken cruises worldwide. There have been just 16 deaths from accidents in that period.