The world's longest sea bridge connecting Hong Kong, Macau and mainland China opened to traffic Wednesday, with excited travellers making their first journeys along what has been described as a politically-driven and costly white elephant.

"I wanted to try this and see if it's convenient. I'll be checking out the view too, after all this is a historic engineering project," said Angie Cheng, 58, who was taking the second bus of the day out to Macau.

The 55-kilometre (34-mile) crossing links Hong Kong with the southern mainland city of Zhuhai and the gambling enclave of Macau, across the waters of the Pearl River Estuary.

Supporters have hailed it as an engineering triumph but detractors say it is a politically driven and costly white elephant that is part of an attempt by Beijing to integrate semi-autonomous Hong Kong into the mainland.

It is the second major infrastructure project tying Hong Kong to mainland China to open within weeks -- a high-speed rail link began operations last month sparking criticism Hong Kong was giving away territory with part of the terminus under mainland jurisdiction. 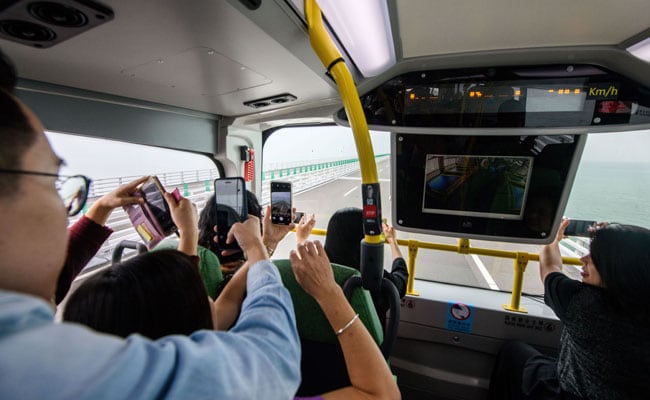 With a sweeping view of the ocean, mountains and rocky islets, the bridge was partly shrouded in haze Wednesday when news agency AFP took an early bus to Macau, but passengers still recorded the whole trip on smartphones.

Traffic was light after criticism from some legislators and residents that public access to the bridge is too limited.

"Every big infrastructure has a relatively low volume of passenger and traffic flow in the initial period. It takes time to build up," secretary for transport and housing Frank Chan told reporters.

Only 10,000 licences have been granted to Hong Kong residents to drive private cars to Zhuhai if they meet highly selective criteria, including holding certain mainland government positions or making major contributions to charities in the southern Chinese province of Guangdong.

Most people will need to go by bus.

Travellers go through immigration and customs points at both ends of the bridge.

Chan did not say how many Hong Kong residents would travel the bridge Wednesday but estimated 30,000 mainland Chinese visitors would make the crossing into Hong Kong on the inaugural day.

The government had previously said the bridge would attract 29,000 vehicles daily by 2030.

Bus journeys to Zhuhai should take 45 minutes, down from four hours.

An early bus trip into Macau's Cotai casino hub took around an hour.

"The duration is similar to the ferry. I get a little dizzy on the ferry, so the bus ride was more comfortable," traveller Cheng told AFP after her journey to Macau.

(Except for the headline, this story has not been edited by NDTV staff and is published from a syndicated feed.)
Comments
longest sea bridgelongest sea crossing bridgesea bridge