As Brexit Deal Goes Down In Flames, Europe Wonders What The Britons Want

There were few clear indications of what further plans PM Theresa May might propose or whether she can hold on long enough to deliver any Brexit deal. 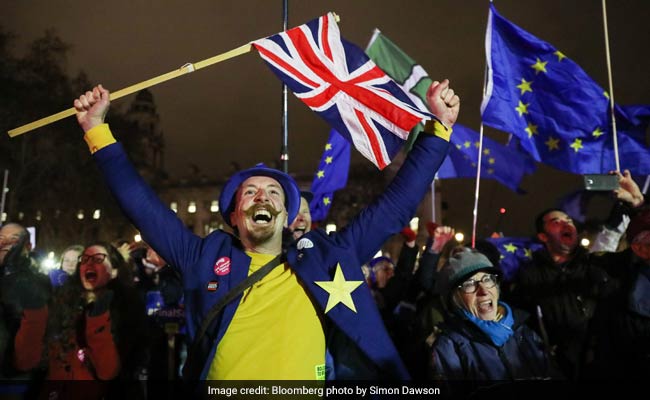 European Union leaders have called on Britain to give them a clear plan to split from Europe.

European Union leaders on Wednesday called on Britain to give them a clear plan to split from Europe, amid concern that the political chaos that led to a historic defeat for British Prime Minister Theresa May's Brexit plan could lead to a chaotic, uncontrolled crash out.

May had been widely expected to lose Tuesday's vote in the British Parliament on the withdrawal agreement she negotiated with the EU, but the definitive scale of her rejection - 432-202 - helped feed a sense on the continent that the March 29 Brexit deadline would need to be postponed, if just to give both sides extra time to prepare for the turbulence that would result from having no safety net of a negotiated transition plan.

Even though May survived a confidence vote in Parliament on Wednesday, there were few clear indications of what further plans she might propose or whether she can hold on long enough to deliver any Brexit deal.

European policymakers gave little ground on their insistence that any withdrawal deal adhere broadly to the principles of the one that was incinerated in the House of Commons. They said that the onus was on British lawmakers to come up with a proposal - any proposal - that could win a majority at home, so that there could be a basis for continued talks between the sides.

So far, Westminster appears unable to do so, with a clear majority only agreeing on scenarios that would be unacceptable and with no common vision for a single path forward.

In Brussels, diplomats said the scale of the defeat suggested that May had fundamental political problems with the Brexit process that went beyond any individual policy inside the deal, meaning they could do little to influence the discussion from outside.

The vote was a "crystal clear" rejection of the withdrawal deal, the EU's chief Brexit negotiator, Michel Barnier, told the European Parliament on Wednesday, after entering the chamber to applause.

"This vote is not a clear manifestation of a positive majority which would define a positive alternative to the proposal on the table today," Barnier said. "It's up to the British government to indicate how we ought to take things forward on March 29 toward an orderly withdrawal."

But he said that the current agreement was the "objective" outcome based on Britain's own red lines, including a vow to uphold the 1998 Good Friday Agreement that quelled a long-running insurgency in Northern Ireland. That agreement depends on an open border between the Republic of Ireland, which is remaining in the European Union, and Northern Ireland, which would depart the European Union along with the rest of the United Kingdom.

Ireland has insisted on keeping the border open, and the British government has also said that is a priority, even as lawmakers have objected to the steps to do so in the deal.

Barnier said that if Britain changes its red lines - by softening its opposition to remaining permanently in the EU customs union, for example - more discussions could be possible.

European leaders said they would not abandon their red lines - and their Irish allies - just to ease the life of an unruly departing member.

There was more openness to the possibility of extending the March 29 deadline.

"When parliament needs more time, then this is something that will have to be considered by the European Council, and personally I would see that as a reasonable request," influential German minister Peter Altmaier told the BBC. An extension would need the consent of the remaining 27 EU leaders. It would be relatively easy to offer one until July, when a new European Parliament needs to be seated, but anything longer would embed the EU in a thicket of legal issues.

One analyst said that the broad-based British opposition to the deal was a sign to Brussels that it may have miscalculated which incentives would resonate in Britain during the negotiations.

"It's a bit like playing strip poker with someone who's an exhibitionist," said Hosuk Lee-Makiyama, the director of the Brussels-based European Center for International Political Economy. "They don't care about economic costs. They care about sovereignty. We just assumed that they had the same interests and the same costs as we do, and they don't."

French leaders, concerned about the ticking clock, appeared to be trying to light a fire under British bottoms.

"It is not up to us, Europeans, to tell to the British what they should do," French Europe Minister Nathalie Loiseau told France Inter, a broadcaster. "Besides hurry up."

(Except for the headline, this story has not been edited by NDTV staff and is published from a syndicated feed.)
Comments
BrexitPM Theresa MayBrexit deal