Israel said around 250 rockets were fired from the Palestinian enclave and its air defences intercepted dozens of them. 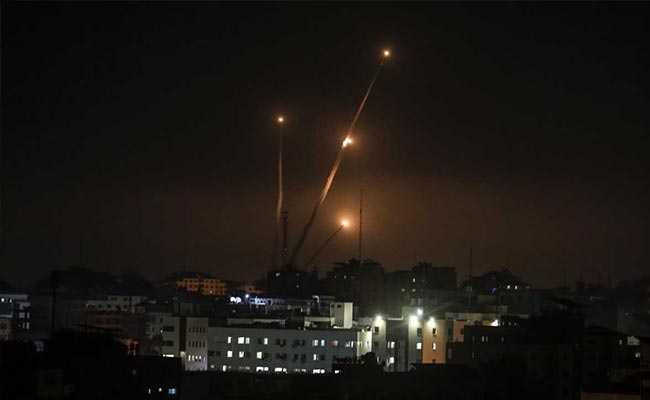 The Israeli army said its tanks and planes hit some 120 militant targets.

Gaza militants on Saturday fired some 250 rockets at Israel, which responded with strikes as a fragile ceasefire again faltered in an escalation that left four Palestinians dead, including a baby in disputed circumstances.

The latest flare-up came with Hamas, the Islamist movement that rules the blockaded Gaza Strip, seeking further concessions from Israel under the ceasefire.

Israel said around 250 rockets were fired from the Palestinian enclave and its air defences intercepted dozens of them.

One woman was seriously injured in a rocket strike on the Israeli city of Kiryat Gat, some 20 kilometres (13 miles) from the Gaza border, police said.

Police said a man was also hospitalised in the city of Ashkelon and spoke of other injuries without providing details.

A house near Ashkelon was damaged while other rockets hit open areas.

The Israeli army said its tanks and planes hit some 120 militant targets.

Israel said one of the buildings included Hamas military intelligence and security offices.

Turkey said an office for its state news agency Anadolu was located in the building and strongly condemned the strike.

The Gaza health ministry reported a 14-month-old baby and her pregnant mother in addition to two Palestinian men killed in Israeli strikes, while 40 were wounded.

It was not immediately clear if the two men were affiliated with militant groups.

Israeli army spokesman Avichay Adraee on Twitter challenged the account of the mother and her baby being killed in an Israeli strike, suggesting they may have died from Palestinian fire.

Adraee did not provide more details and the army refused to comment further.

A statement from Hamas ally Islamic Jihad claimed responsibility for at least some of the rocket fire and said it was prepared for more.

Israel said it was closing its people and goods crossings with Gaza as well as the zone it allows for fishermen off the enclave until further notice due to the rocket fire.

Egyptian and UN officials were engaged in discussions to calm the situation, as they have done repeatedly in the past, while the European Union called for an immediate halt to rocket fire from Gaza.

The UN envoy for the Israeli-Palestinian conflict, Nickolay Mladenov, called on "all parties to immediately de-escalate and return to the understandings of the past few months."

The United States condemned the rocket attacks on Israel and said Washington fully supported the Jewish state's "right to self-defense against these abhorrent attacks."

The escalation follows the most violent clashes along the Gaza border in weeks on Friday.

Four Palestinians, including two Hamas militants, were killed after two Israeli soldiers were wounded in a shooting during weekly protests on the border.

Israel blamed Islamic Jihad for what it called the sniper attack, but stressed it held Hamas responsible for all violence from Gaza.

Israel and Palestinian militants in the Gaza Strip have fought three wars since 2008 and fears remain of a fourth.

A ceasefire between Israel and Hamas brokered by Egypt and the United Nations had led to relative calm around Israel's April 9 general election.

But the past week saw a gradual uptick in violence.

With the ceasefire at risk, a Hamas delegation led by its Gaza head Yahya Sinwar went to Cairo on Thursday for talks with Egyptian officials.

The ceasefire has seen Israel allow Qatar to provide millions of dollars in aid to Gaza to pay salaries and to finance fuel purchases to ease a severe electricity shortage.

Several factors may lead Israel to seek to calm the situation quickly.

Netanyahu is engaged in tough negotiations to form a new government following last month's election, while Israel is due to host the Eurovision song contest in Tel Aviv from May 14-18.

The country also celebrates its Independence Day on Thursday.

On the Gazan side, the Muslim holy month of Ramadan begins in the week ahead.

Palestinians have participated in regular demonstrations and clashes along the Gaza border for more than a year, calling on Israel to ease its crippling blockade of the enclave.

At least 271 Palestinians have been killed by Israeli fire since the protests began in March 2018, the majority along the border.

Two Israeli soldiers have been killed in that period.

Israel accuses Hamas of using the protests as cover to carry out attacks and says its actions are necessary to defend the border and stop infiltrations.

The results of a UN investigation released at the end of February found that Israel may have committed crimes against humanity in responding to the border protests, as snipers "intentionally" shot civilians including children, journalists and the disabled.

Israel rejected the report "outright" but Hamas called for it to be held accountable.