World leaders have been scrambling for weeks to broker a truce, with Russian President Vladimir Putin estimating that close to 5,000 people have been killed so far in weeks of fighting over the mountainous province. 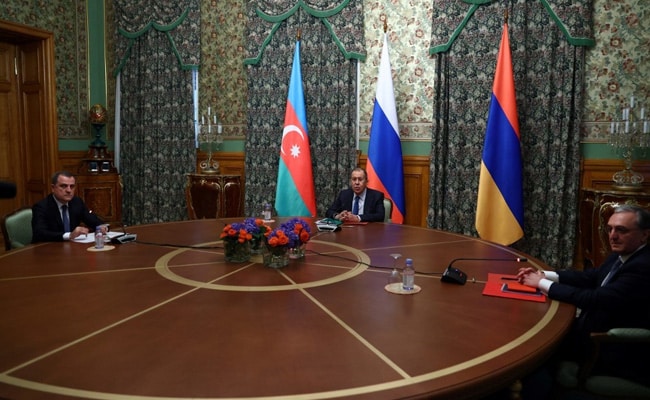 US Secretary of State Mike Pompeo tweeted that the negotiations had been "intensive." (File)

Armenia and Azerbaijan have again agreed to respect a "humanitarian ceasefire" in the Nagorno-Karabakh conflict effective Monday, the US State Department announced, after previous attempts to stem the bloodshed in the disputed region failed.

World leaders have been scrambling for weeks to broker a truce, with Russian President Vladimir Putin estimating that close to 5,000 people have been killed so far in weeks of fighting over the mountainous province.

Both an initial ceasefire negotiated by France and a second brokered by Russia have already broken down.

The latest truce would take effect at 8:00 am local time (04H00 GMT) on Monday, according to a joint statement from the US State Department and the so-called "Minsk" group attempting to bring a negotiated end to the conflict.

Azerbaijan on Sunday welcomed the agreement in a statement from its ambassador to the US, Elin Suleymanov, while pointing the finger of blame at Armenia.

"We urge Armenia to observe the ceasefire and stop its military provocations as agreed. Azerbaijan is strongly committed to achieving peace and the high number of Azerbaijani civilian deaths in recent weeks shows who is the aggressor," Suleymanov said.

Azerbaijan and Armenia have been locked in a bitter conflict over Karabakh since Armenian separatists backed by Yerevan seized control of the mountainous province in a 1990s war that left 30,000 people dead.

Karabakh's self-declared independence has not been recognised internationally, even by Armenia, and it remains a part of Azerbaijan under international law.

The current conflict broke out September 27. Armenia and Azerbaijan accuse each other of having targeted the civilian population, and breaking the previous truces.

The latest ceasefire push came after US Deputy Secretary of State Stephen Biegun met in Washington Saturday with Armenian Foreign Minister Zohrab Mnatsakanyan and Azerbaijani Foreign Minister Jeyhun Bayramov and the co-chairs of the Minsk Group, comprised of the US, France and Russia.

US Secretary of State Mike Pompeo tweeted that the negotiations had been "intensive."

Pompeo had met separately in Washington Friday with Mnatsakanyan and Bayramov, urging them to "end the violence and protect civilians."

Negotiations continued behind the scenes Saturday in the US capital, with Biegun's meetings and calls from US national security adviser Robert O'Brien to Armenian Prime Minister Nikol Pachinian and Azerbaijani President Ilham Aliyev.

"Congratulations to all of them for agreeing to adhere to the cease fire today. Lives will be saved in both nations," O'Brien tweeted Sunday.

Since September 27, Azerbaijani forces have conquered territories beyond the control of Baku since the 1990s.

Beyond a humanitarian ceasefire, the international community has so far been unable to negotiate a lasting truce and even more a peaceful outcome to the conflict. Moreover, Armenia ruled out any "diplomatic solution" on Wednesday.

The State Department said the Minsk co-chairs and the foreign ministers "agreed to meet again in Geneva on October 29" to seek "all steps necessary to achieve a peaceful settlement of the Nagorno-Karabakh conflict."

US President Donald Trump, campaigning frantically for reelection as he lags in the polls behind Democrat Joe Biden, has promised to resolve the conflict.

"They are incredible people. They're fighting like hell," he said of Armenians during a campaign rally in New Hampshire on Sunday, nine days before the November 3 election.

"And you know what? We're going to get something done," he told the crowd.

A group of Armenians had attended his rally in Ohio the day before, he continued.

"The problems that they have, the death and the fighting and everything else, we'll get that straightened out. That's going to be -- I call that an easy one," he said, touting his diplomatic credentials without offering details.

The US has said it is neutral, but in a recent interview Pompeo described Armenia's actions as defensive.