"Men With Rifles Yelling At Us": US Senator As Protesters Seek Lockdown End

Dozens of demonstrators crowded the lobby of the building in Lansing, where they demanded to be allowed inside the House Chamber. 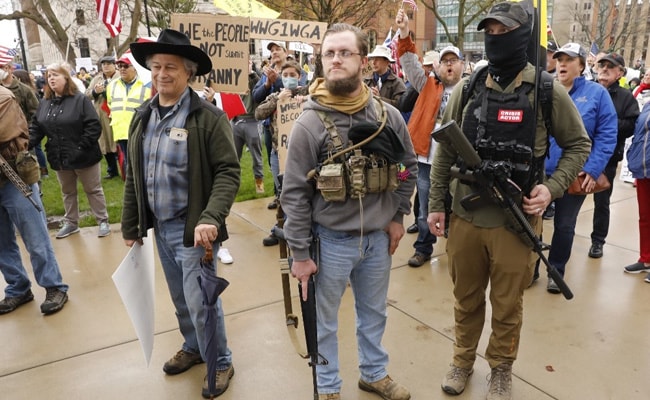 Demonstrators, including some carrying guns, entered the capitol building in the US state of Michigan on Thursday and demanded the Democratic governor lift strict coronavirus lockdown orders, as some lawmakers reportedly donned bulletproof vests.

Dozens of demonstrators crowded the lobby of the building in Lansing, where they demanded to be allowed inside the House Chamber.

State police, wearing masks, blocked them from entering. None of the protesters appeared to be wearing masks.

"Directly above me, men with rifles yelling at us," tweeted Senator Dayna Polehanki along with a photo showing four men, at least one of whom appeared to be carrying a weapon.

"Some of my colleagues who own bullet proof vests are wearing them. I have never appreciated our Sergeants-at-Arms more than today," she continued.

More protesters could be seen outside carrying signs, including one depicting Governor Gretchen Whitmer as Adolf Hitler.

The demonstration, dubbed the American Patriot Rally, was organized by a group calling itself Michigan United for Liberty.

"We do not agree with or consent to our unalienable rights being restricted or rescinded for any reason, including the COVID-19 pandemic," the group said on its private Facebook page, where it has more than 8,800 members.

"We believe that every American and every Michigander has the right to work to support our families, to travel freely, to gather for religious worship and for other purposes, to gather in protest of our government and to direct our own medical care."

The protest comes a day after a Michigan court ruled that stay-at-home directives issued by Whitmer on March 24 do not infringe on residents' constitutional rights, according to local media reports.

It was the second time this month that protesters have demanded Whitmer lift lockdown restrictions in the state, which has seen more than 3,500 people killed by the coronavirus, according to a tally by Johns Hopkins University.

On April 16 around 3,000 protesters, some of them also armed, descended on Lansing for "Operation Gridlock," causing a massive traffic jam around the capital building.

A day later Trump appeared to lend his support to them and scattered protests elsewhere, tweeting "LIBERATE MICHIGAN!"

Whitmer, whose name has emerged as a potential running mate for presumptive Democratic presidential nominee Joe Biden, shrugged those protests off, telling CNN it was "OK to be angry."

"I've said it before, and I'll say it again -- Michigan is an extraordinary place to live because of the people who call it home. There are millions of Michiganders doing their part to slow the spread of #COVID19 every single day. We are going to get through this together," she tweeted later Thursday, without commenting directly on the protests.

Despite the demonstrations, Whitmer's handling of the virus crisis has been met with a generally favorable response.