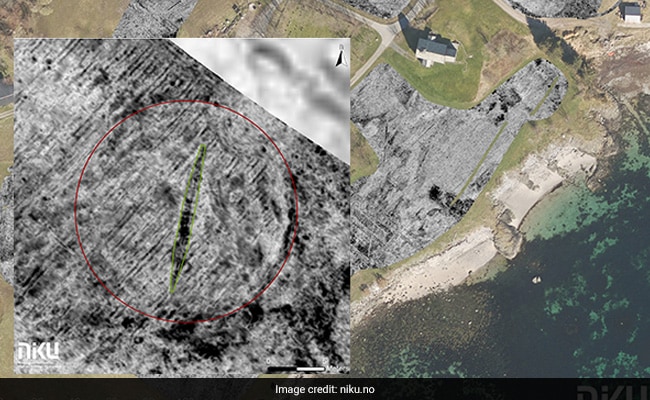 The discovery was announced on November 22 by the Institute for Cultural Heritage Research.

There was no greater honor for a Viking than to die in battle, beginning a journey from the flat Earth up toward Valhalla, where an eternal feast awaited. "They can have a fight and party every day," Knut Paasche, a period archaeologist said, "and then the next day, do it again."

But they needed a vessel to get there. Chieftains and kings, laid to rest in long ships with swords and jewels, were buried in earthen mounds signifying their stature, Paasche said. The larger the ship and mound, the more important the burial.

Archaeologists using ground-penetrating radar found a big mound carved into a western Norwegian island - along with the remains of a "huge" ship as long as 55 feet, Paasche told The Washington Post, in a discovery that may tell new tales about how the ships evolved to become fearsome and agile vessels more than 1,000 years ago.

The discovery on the Edoy island, announced November 22 by the Institute for Cultural Heritage Research - where Paasche is an archaeologist and researcher - was part luck.

Researchers had finished for the day in September, the institute said, but decided to make a quick pass in a farmer's field near a medieval church.

The georadar vehicle rumbled over the soil, revealing the husk of a ship set inside a burial mound that was once 60 feet in diameter, Paasche said, but has been destroyed by centuries of plows tearing through the dirt.

It is unknown how much of the ship remains before excavation begins. Researchers can pinpoint the ship's backbone, the 42-foot keel, along with hints of planking, Paasche said, but it is unclear whether the occupant was buried with any riches or weapons.

Wood from a buried ship found last year was rotted away, leaving only black detritus, he said. Another ship found in England also had no wood, though an outline of nails helped identify it, Paasche said, so he hopes for more nails or other finds.

Anything helps, he said, to understand an era with few immaculate artifacts as large as a vessel. "There are only three well-preserved Viking ships in Norway," Paasche said, which are all housed in a museum in Oslo. "And we need more."

Edoy and the surrounding region were well traversed in the Merovingian dynasty, which preceded the Vikings, Paasche said, and Viking chieftains later enriched themselves by levying taxes on those traveling the network of fjords.

Many battles were fought in the area, he said, including some waged by Harald I Fairhair, the Viking who unified Norway as its first king in the ninth century.

The ship may belong to the Viking era, which ran from about 800 to 1000, or even earlier in the Frankish Merovingian period in Europe, Paasche said.

Typically, 26 rowers would power a large Viking ship through wind-blasted fjords, but the sails would unfurl on the sea, he said.

That innovative dual design helped Vikings roar into England, quickly attacking soldiers and settlements before jetting off, leaving their enemies startled and confused.

"They made ships that no one else could cope with for 200 years," Paasche said. But lost in the imagery of a marauding Viking is a history of far-reaching trade and skilled fishing, he said.

The Edoy find was remarkably similar to another buried ship's discovery last year near Halden, south of the capital, which produced a similar signature.

The institute also used ground-penetrating radar to uncover a 65-foot Viking ship amid several other burial mounds. The ship is believed to be the biggest Viking-age ship ever buried. "I think we could talk about a hundred-year find," archaeologist Jan Bill, curator of Viking ships at Oslo's Museum of Cultural History, told National Geographic at the time.

Paasche marveled at finding two buried ships in Norway within a year, excited at the prospect of discovering more about the Viking age.

Vikings were terrified of sailing off the edge of the world, Paasche explained, believing a large god of a snake was there to eat them whole. And yet, they threshed their oars toward new worlds.

"How could they dare to go westward?" he asked.